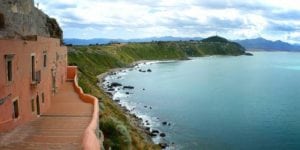 In Sicily, Italy, the Marine Protected Region of Capo Milazzo has become a reality. For a long time, the city of Milazzo was waiting for this news. The consortium for the management of the reserve will implement procedures for the installation of projects that’s necessary to boost the area in of light of the summer travel and tourism season.

At Aspra, near Bagheria, the Balistreri family has collected and preserved sea relics and has created a museum of the art to preserving anchovies and maritime arts. It is a museum that tells the story of fishermen and salters and that recently added new exhibition space where visitors can admire ancient lithographic stones and visit exhibitions and attend to workshops in collaboration with schools.

Thanks to the Fish Shop it is possible to taste local delicacies – and they are delicious.

A tribute to Pirandello, a Nobel prize winner who was an author from Sicily in the 18th century, was participated by 500 students, who spent three days teaching drama, creative writing, scenic movement and visual power of art based on Pirandello poem, “Uno, Nessuno, Centomila.”

More investments in regional transport means the commuter train system will resume to meet increase in demand and to improve quality performance. These are the objectives of the new recently-signed service contract by the Sicilian region with Trenitalia, which is valid until 2026.

Starting 2019, 43 new trains will be delivered, including 4 Pop, the best trains currently in Europe.

There will also be special promotions and new links. In the province of Palermo, tourists will be able to participate in the “Sentinelle del mare” ( the Sea Guardians) project, which aims to monitor and protect Mediterranean animal and plant species.   To help understand the state of marine biodiversity, cards will be handed out to tourists for them to document the marine species encountered at sea during excursions.

The fourth edition,”Ustica Villaggio Letterario,” is currently being held from 2 June to 1 September.  Approximately 160 events include book presentations, astronomy, volcanology, theatrical performances, music. Sport, fashion, photography, among many others. This edition will be dedicated to the Enzo Maiorca.

Sicily did not appear interested in the flow of tourists coming from China. This is no longer the case.   The Third International Eusair Forum is pursuing a strategy that also includes sustainable tourism. This Italian destination is the coordinator of the Italian regions and is part of the “China Country” project. The  year 2018 has been declared by the European Commission and the Chinese government as the year of UE China tourism.

Newly-released 2017 tourism data show iit was a year of strong growth for Sicily with over 14 million admissions (+ 5.1%) and almost 5 million arrivals (+ 7.9%). The average stay was 3.1 nights per visitor. The province’s most visited is Messina, which attracted  23.5% of the visitors to the island. Second is Palermo and third is Catania. Tourists from France, Germany and the United Kingdom comprised 45% of foreigners in Sicily. Strong growth also for tourists from Russia (+ 58%) and Poland (+ 27.8%).

To promote the Sicily brand, the resources included in the UE Contribution Plan (P.O. ERDF 2014-2010) will be utilized. The new plan aims to strengthen the regional brand by marketing Sicily as a prime destination.   The campaign is also seeking to make the experience unique and unforgettable through new forms of communication.

The project also takes aim at small and medium-size Sicilian companies, with focus on aggregation and integration between them, for the organization of tourist packages, site adaptation and educational tours.