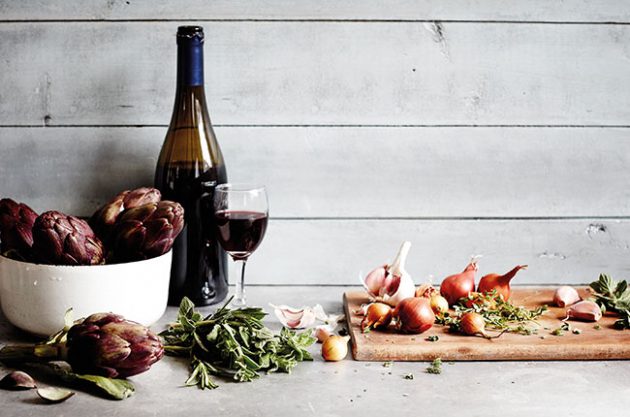 10 things to know about cooking with wine

10 things to know about cooking with wine

Like any other ingredient you need to understand how wine works in a dish and the best techniques for using it. Here are 10 things to remember:

1) The wine you use needs to be drinkable. By that I mean it must be clean and fresh and, obviously, not corked. It shouldn’t taste like vinegar or be so old it’s lost all its fruit. If you have leftover wine decant it into a smaller bottle or container so that the air doesn’t get to it. Wine that’s been left open for 4–5 days is probably OK. Wine that’s been sitting in your cupboard for 4–5 months generally isn’t.

2) That doesn’t mean it has to be the wine you normally drink. I’ve had great success using sweeter wines such as white Grenache or blush Zinfandel which are not particularly to my taste but which are great in a recipe or cocktail.

3) Don’t use wines labelled as cooking wines which tend to be particularly poor quality and not that much of a saving over a cheap bottle of wine.

4) On the other hand don’t feel you have to use an expensive wine. The only circumstances in which I’d advocate it is if a dish needs only a small amount of wine and you’d otherwise have to open another bottle. To steal a glass from the bottle you’re planning to drink may be the cheapest way to make the dish.

5) You need a less good wine if you’re cooking a slow-cooked dish like a stew than if you’re quickly deglazing a pan. A good trick is to add a small dash of better wine at the end of a long braise which makes it taste as if that’s the wine you’ve cooked with.

6) The most versatile wines are crisp, dry, unoaked whites such as Pinot Grigio and medium-bodied but not overly tannic reds like Merlot. Wines with a pronounced aromatic character such as Riesling or Gewürztraminer are less flexible, but may turn out to be delicious with, for example, a creamy sauce. Feel free to experiment.

7) Fortified wines such as Sherry, Madeira and Marsala are great for cooking. A small quantity adds strength, depth and often a welcome sweetness.

8) Reducing a wine by simmering will accentuate its dominant character such as sweetness, tannin or acidity. But it’s a useful way of concentrating flavour when you want to add a small amount to a dish or dressing.

9) A wine-based marinade will tenderize meat but it will change the flavour and make it more ‘gamey’ if you do it for longer than a couple of hours. You should also discard the marinade unless you’re going to cook it well.

10) Even in recipes that feature a significant amount of wine you usually need another ingredient such as stock, cream or passata/strained tomatoes to balance it. A homemade chicken or vegetable stock is a boon. Freeze leftover wine in an ice cube tray and keep the cubes handy in a freezer bag to add to a dish.

Finally, a question I’m often asked. If you cook with wine is there any alcohol left in the dish?

There is a widespread misconception that it all cooks out but unless you’re cooking the dish for 3 hours or more there will be a residue depending on how much wine you’ve used. Worth bearing in mind if you’re cooking for kids or non-drinkers.