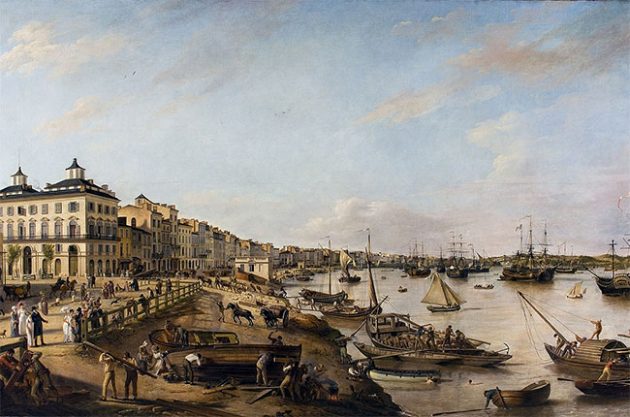 Jane Anson interviews Ariane Khaida about becoming head of Duclot merchant house in Bordeaux and her views on what the city’s wine trading houses still have to offer amid questions over the current system.

Being the only woman to head up a major Bordeaux négociant was the reason that I was first going to interview Khaida three years ago. And yes I wish that wasn’t worthy of a headline, but France is a country where only 2% of CEO roles go to women (although a new law says they must represent 40% of board members in CAC 40 companies), and yet the Place de Bordeaux somehow manages to slip underneath even that low bar.

At the time she was managing director of Descaves, the third woman in the role after the legendary Madame Jeanne Descaves and Madame France Chauvin. Descaves was founded in 1881 and specialises in the sale of mature Bordeaux, with cellars containing around 100 vintages dating back to 1875. Becoming the next woman at the helm was seen as such a coup that the expectation in Bordeaux was that Khaida would spend the rest of her career there.

But in March 2014, she changed the narrative and left to head up a far more powerful and dynamic name – Duclot. Not the biggest négociant house (that award goes to Castel Frères and Joanne in terms of 2016 export figures) but the most high profile, with the Moueix name standing tall above it. Duclot comprises, besides négociant and online distribution, shops such as Badie and L’Intendant in Bordeaux and La Cave at Galeries Lafayette in Paris as well as offices in New York and LA that are aimed squarely at courting relationships with sommeliers and high-end restaurants.

In retrospect, her move should not have been all that surprising. Khaida moved to Bordeaux from Paris in 2002. I met her soon after I arrived from London in late 2003, and we were in the same tasting group for a while. We talked plenty about our home towns (she’s from a non-winemaking family in the Champagne village of Rilly la Montagne) but I only really learnt about her professional background when we sat down in the stunning glass-walled rooms at the top of Duclot’s new offices for this interview.

It turns out that Khaida can fly Cessnas, is a graduate of one of France’s oldest and most selective engineering schools, and spent five years working at LVMH, including two flying around the world – although sadly not at the controls of her own plane – documenting quality control techniques for sourcing the highest of high end leathers and skins (sorry, but luxury handbags are not for the squeamish) for the Louis Vuitton collection. Her experience there makes her a credible voice in what are turbulent times for négociants.

‘For those who say that the Place de Bordeaux is old-fashioned, or even moribund; I would reply that moment has passed. The people who really understand Bordeaux know this. Today the best négociants are true partners for châteaux. There were many years when only critics’ scores counted and our role was seen as simply moving stock. Today personalisation and adding value is key to luxury wines, and we can bring vision, confidence, brand building. But we need to be working at a level that demonstrates our importance, and we need to be transparent with the châteaux in how we do that’.

On arriving in Bordeaux, she first spend three years with Bruno Borie at Ducru Beaucaillou, helping the château move further into the luxury space in terms of labelling, distribution, marketing. But it was always a role with a time limit (‘in Bordeaux châteaux, the owner is the owner, that’s simply the way it is’) that meant when the opportunity arose to move to Descaves she accepted, shadowing Chauvin for 18 months on the understanding of taking over following her retirement.

‘There were infinite things to learn,’ she says, ‘moving from château-side to a négociant. A typical négociant deals with 200 brands or more, and has to understand the history of each property, the different relationships within them, and what the ambitions are for their wine. All this will affect the dynamics of how to do business with them, and how to find the right outlets and activities for the wine. I was extremely lucky to learn this at Descaves, in a family-style environment with 15 staff. At Duclot we have 200’.

She says her first nine months at Duclot were also about, ‘observing, learning, asking questions. Only then did I begin to take decisions’.

The last time I visited the Duclot offices was in 2011 to interview Jean Moueix. The company was then housed across a warren of offices in the Jardin Public area of suburban Bordeaux. Today it overlooks one of the most beautiful and iconic public squares in the city, Place Rohan, directly next to the town hall and the city’s Saint André cathedral. The building itself has been restored and renovated by architect Marc Barani and looks more like a New York advertising agency than a traditional négociant house. It feels like it is readying itself for the challenge of increasingly disruptive châteaux.

‘As négociants we don’t want to be fighting with châteaux in terms of what stock is on the market, it doesn’t make sense for either side,’ says Khaida, quietly proving why she should not be underestimated. ‘There is an increasing desire to cut margins to third parties (from the traditional 15%), which may be why some châteaux are holding back wine to sell later. I can understand that but it may also lead to them missing out on brand building and visibility. That is our expertise, but to do it we need stocks’.

‘The way international wines work with the Place de Bordeaux has been hugely instructive I believe. Some châteaux and négociants resisted it at first, but the benefits are clear now, and it has been informative for all sides. Estates such as Masseto and Opus One bring reflections and experiences that help Bordeaux. They have extremely careful control of their distribution, and at first we were surprised by how exacting in terms of where we placed their bottles. But they were extremely open, very clear about where they were already being sold to avoid repetition. It is only with partnership that these things can be fully managed – coupling our knowledge of global markets with châteaux own individual strategies. It’s a powerful combination when used correctly’.

If I was a château owner, I’d be listening. But for anyone wondering about the management of Descaves today, Khaida was not succeeded by another woman. The power balance of Bordeaux continues.