Champagne Henri Giraud is set to launch a new label for its classic NV line that claims there is zero pesticide residue contained in the bottles – the first to do so in Champagne. 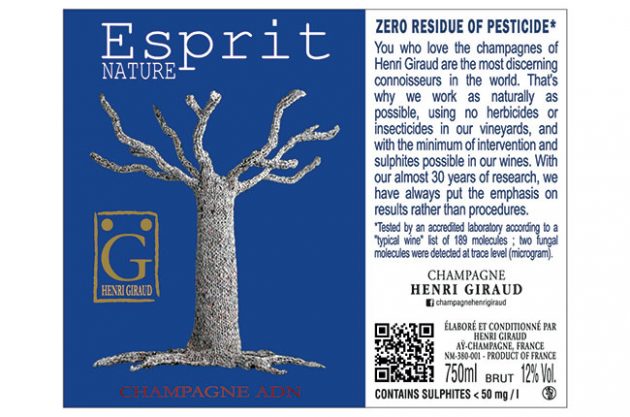 The new ‘no pesticide residue’ label

The Champagne was monitored for two years by an independent COFRAC accredited laboratory, that looked for traces of 189 different chemical compounds that are commonly used during vine growing.

The study found traces of just two fungal molecules at microgram levels, which were not counted as significant, and nothing else.

The use of pesticides in vineyards has become a serious topic of debate in France over recent years, and this label reflects, as Claude Giraud told Decanter.com, ‘a desire to move on the debate, and to show that Champagne is taking leadership on this issue.’

In Bordeaux, protests have been staged by campaigners against pesticide use, particularly after a 2016 French television documentary highlighted health risks of pesticides to children.

Champagne Henri Giraud has worked without pesticides or weedkillers for over 30 years, and carried out extensive soil studies to understand the terroir.

Minimal sulphur is used during winemaking. The company is not certified organic, except for one bottling that has Ecocert certification, but is not sold as such.

‘We used some synthesised products against mildew, which is a real challenge in Champagne, and although these are non-chemical they are not allowed under organic rules.’

‘But what we really hope to do here is to keep things simple, and invite the consumer to feel reassured so they can then return to focusing on the pleasure in the bottle,’ said Giraud.

Called ‘Esprit Nature’, the new bottles are due to be launched on January 1 2018.

The ‘zero pesticides’ labeling will eventually be extended to the whole of the Champagne Henri Giraud range.