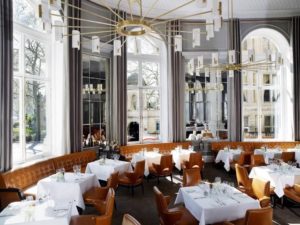 Corinthia Hotel London’s Northall restaurant, famed for its Best in British menu, has a new Head Chef at the helm.

Ewan Simpson, fresh from his two-year tenure as Executive Head Chef at Rowhill Grange Hotel, took up his new role on July 10th. He led a team of 19 at the hotel and created menus with a seasonal, modern British twist. Its AA silver stars and two AA Rosettes are eclipsed by his five-year period directly before as Sous Chef at Claridge’s, the award-winning Mayfair Hotel with five AA red stars and three AA Rosettes. Here he supervised a brigade of 56.

He joined Claridge’s from The Stafford Hotel where he worked for five years, leaving as Sous Chef of the 110-room hotel. Prior to that, Ewan spent three years working in three restaurants in Kent after graduating from West Kent College with a BTec National Diploma in Hotel & Catering Management.

“I know Ewan from Claridge’s and I am thrilled to have him on the team. Corinthia always supports young British talent and he will bring a new approach to modern British cuisine, ushering in an exciting new phase for the restaurant.”