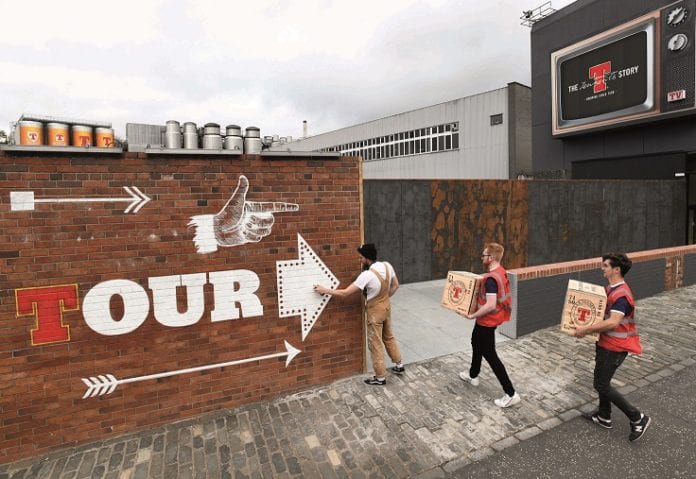 Following a seven-figure investment, a new visitor center in the East End of Glasgow is set to make Tennent’s Lager’s Wellpark Brewery the leading beer destination in the UK when it opens to the public on 22 November.
‘The Tennent’s Story’ experience is the biggest single investment the company has made in the brewery’s visitor experience, which now boasts an impressive 3-floor development at the Duke Street site.

The major development aims to become the UK’s biggest beer attraction, significantly boosting local and international visitor numbers to Glasgow’s East End. The Tennent’s Story will be a must-visit destination in Scotland and puts the country’s favorite beer at the heart of Glasgow tourism and the city’s ambitions for visitor growth by 2023.

This new immersive experience will trace the history of Scotland’s oldest brewery, from the 1500s to the present day. Building upon the existing tour and tasting experience, The Tennent’s Story will take visitors behind the scenes of the famous beer, covering everything from its origins, production, provenance and even how to pour the perfect pint.

Centred on the story of Hugh Tennent and the first brew of Tennent’s Lager in 1885, which was described by newspapers at the time as a “madman’s dream”, the visitor centre will be home to artefacts gathered from the first days of brewing at Wellpark in 1556 through to today.

Motion capture animations developed by Glasgow School of Art, new artwork from graffiti artist Conzo Throb, personal stories from generations of Tennent’s alumni and fascinating artefacts from days gone by take visitors on a monumental and historic journey before setting off on the brewery tour.

The tour ends at the revamped tasting experience which is home to the country’s latest Tennent’s Tank Lager installation – serving up brewery fresh pints of Tennent’s from impressive copper tanks filled with unpasteurised liquid straight from brewery floor only a few hundred meters away.

Visitors to Scotland currently spend £1 billion every year on food and drink, with beer tourism set to contribute to a further £1 billion in growth by 2030 as outlined in Scotland’s Food Tourism Action Plan.

Neighbouring Drygate Brewery, which also lives on the Wellpark site, plays a vital part alongside The Tennent’s Story, the brewery tour and the Tennent’s Training Academy in making the East of the city a hub of activity and the ultimate beer destination.

Alan McGarrie, Group Brand Director for Tennent’s Lager, said: “The Tennent’s Story is at the heart of Glasgow’s history, and with this significant company investment at our home at Wellpark, we are bringing the story to life – bigger and better than we ever have before, as we showcase the brewery, the beer and the brand.

“With an ever-growing interest in the provenance story of beer, and a subsequent rise in beer tourism, we want to give locals and visitors to the city a behind the scenes look at not just a working brewery, but the history of Scotland’s No.1 beer and the cultural icon that is Tennent’s Lager.

“It has been an incredible experience to watch the transformation of the visitor centre over the last 7 months, which will build upon Scotland’s best-loved brewery tour and we can’t wait to open the doors to the public in November. We look forward to watching the impact and growth this will have for tourism not only in Glasgow, but in Scotland as a whole.”

VisitScotland Regional Leadership Director Jim Clarkson said: “Visitors love the Tennent’s brand for the same wit and warmth of personality that they love in Glasgow itself. It’s a great fit for the tourism experience in the city, and I’m delighted at this investment which will contribute to Glasgow’s ambitions for an additional one million visitors by 2023.

“This is an exciting time for Scottish brewing with the growing global demand for variety and quality of beer greater than ever. Scottish beer appeals to almost a quarter of visitors to Scotland and this investment demonstrates a real commitment to further promoting Scotland’s brewing heritage.

“Tourism is more than a holiday experience – it is integral to sustaining communities across Scotland by generating income, creating jobs and stimulating social change.”

Councillor David McDonald, Chair of Glasgow Life and Depute Leader of Glasgow City Council, said: “If we are to achieve our target of attracting one million more tourists by 2023 then it’s crucial that we continue to tell Glasgow’s stories to the world and there are few better than The Tennent’s Story, which is almost as old as the city itself.

“Our focus is on showcasing Glasgow as an outstanding global city; one that’s welcoming and vibrant with a rich cultural history, a flourishing food and drink sector and an unrivalled visitor experience. Tennent’s investment in this exciting new attraction strongly reflects our ambition and will undoubtedly boost Glasgow’s tourism economy in the coming years.”