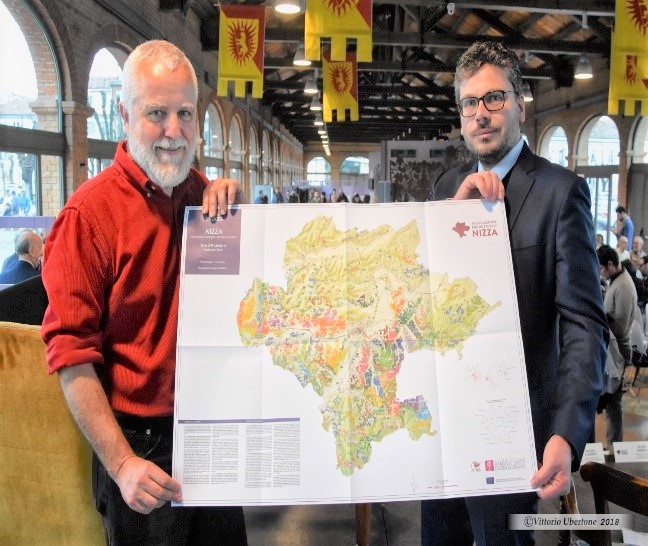 What I did not know about Nizza DOCG before I attended the Master Class in Manhattan would fill at least one book (more likely two).

First of all – where is it? Nizza Monferrato is located in the Asti territory between the hills of Asti, Alba, Alessandria and Acqui Terme, and recognized as part of a UNESCO World Heritage.  History suggests that Nizza Monferrato was founded in 1225 after the destruction of some castles in the area of Alessandria. The Abbey of San Giovanni in Lanero, close to the rive Belbo, became the town center.

After years of turbulence and destruction, the town was renewed and restored thanks to the House of Savoy (17th-18th centuries), becoming known for its silk production. It was also important for its militia and awarded the Silver Medal for Military Valor when it resisted Fascism (WWII).

The Nizza zone is lower in elevation than the Barbera vineyards in Alba and experiences a warmer growing season. Nizza Monferrato includes 18 municipalities for a total of 160 ha. Currently there are 43 producers in the Nizza DOCG wine producers association.

Why Nizza? Nizza is the name of the stream that flows through the area offering a short, appealing designation from an unmovable geographic reference that was easy to remember….and it did not already exist for wine, making story-telling about the land, wine and producers much easier.

Nizza vines require sun and therefore occupy the space on the slopes that face southeast to west, excluding the valleys. The production zone (Tertiary Piedmont Basin), is a hilly region that came from the rising of the seabed during the Tertiary epoch. The soils are calcareous, medium depth, and characterized by sandy-clay marls and stratified sandstone. The Barbera grape is the most planted red grape in Italy’s Piedmont region

Nizza Leadership. The main players in getting the DOCG designation for Nizza are Giulano Noe, a celebrated consulting enologist and Michel Chiarlo, a pioneer winemaker in the region and the first president of the Associazione Produttori. Chiarlo started his own winery in 1956 and was among the first to introduce malolactic fermentation for Barbera (1974).

Nizza first appeared on labels with the 2000 vintage; however, Nizza DOCG was born in 2014 with the first bottle ready in July 2016. Prior to this date, Nizza had been designated as a Superiore subzone of the Barbera d’Asti DOCG.

Strict Regulations. In order to be a Nizza DOCG, the grape composition must be entirely (as in 100 percent) Barbera with a maximum yield of 7 tonnes/ha. The minimum alcohol level is 13 percent (13.5 percent is permitted if a single vineyard is named on the label). There must be a minimum of 6 moths in barrel aging (12 months for wine labelled Riserva) with 18 months for total aging (or 30 months for wines labelled Riserva).

The strict production regulations include the lowest yields in Piedmont. By comparison, Barolo allows a maximum of 8 tons per hectare and Barolos, from a single vineyard within an official geographic zone, allowed up to 7.2 tons per hectare.

The family has lived in Canelli since the 17th century where they had a few vineyards on the hills surrounding the Sant’Antonio hamlet, an area noted for producing excellent Moscato d’Asti. Starting in the mid-19th century the family started to make wine from their own grapes with distribution in Italy, Latin America, Brazil and Argentina.

Two Barbera vineyards were planted in 1934 and 2002 in the municipality of San Marzano Oliveto. The exposure is south east by east with a 10 percent gradient. The terroir is a combination of limey-sandy to mostly clay-lime with surfacing grey marl with moderate drainage and little organic matter in the deep layers. The bunches are usually small and loose with small berries.

Traditional vinification in steel vats immediately followed by storing 100 percent in new oak 300-liter casks. A second racking is performed between July and September, based on the wine’s sensory evolution (presence of lees). The wine is left in small barrels for 10-13 months and then moved to large casks for another 10-12 months where it ages until bottling. Refinement in bottle for 18-36 months.

The eye finds purple/red tones that vary between garnets and rubies. The nose finds stone fruit, strawberries, vanilla and almonds. Full-bodied on the palate and deliciously complex, leaving a depth of flavor and rich fruit beautifully balanced with hints of florals. Pairs well with grilled and roasted meat, and soups.

The first vines (5 ha) were planted by Davide Baldizzone in 1937. The current owners, Nino and his wife Graziana, expanded the vineyards to 20 ha and have managed the winery since the 1970s.

The grapes are harvested manually and transported to the winery where the white grapes are destemmed and pressed; the red grapes are destemmed and crushed. The rasps are taken off and passed under the wine press. This is followed by fermentation on selected yeasts with skin contact at a controlled temperature. The wine is poured into French oak barriques, tonneaux and big barrels for 2500 liters for 16-18 months.

Produced from 55 -year old vines, the eye is attracted to the deep ruby red/violet/black hues. The bouquet delivers intense florals, with a wave to wet wood, black cherries, spice and cocoa, intensified by deep tannins, and minerality – guiding the palate to a delicious and intriguing complexity with a hint of cherry. Pair with duck, goose, game birds and cheese. Serve in large glasses.

Tenuta La Court was designed to be the Chateux del Nizza DOCG. Formerly the Aluffi estate (1880s), this is a single parcel of over 20 ha located on 2 hills. The size of the ha makes the winery one of the most important in Monferrato. The site is recognized as a UNESCO World Heritage location. Majestic cypress trees, planted on the hilltops since the mid-19th century, are a symbol of the estate and celebrated by Giancarol Ferraris on the label of Nizza Cipressi DOCG.

The soil, astiane sands, consists of calcareous clay marl of sedimentary marine origin, with lime and sand, rich in microelements, including magnesium. Produces ample, intense, elegant wines of good structure, that are fresh and smooth, with long finish.

Malolactic van fermentation for 15 days in 55 hl oak vats with the skins, a soft shower system wets the cap at an initial temperature of 30 degree C and decreased to 27 degrees C.

Purple to the eye with ruby highlights. The nose finds violets and spices, then the palate discovers black plums, dark chocolate and wild cherries. The finish is balanced with tangy acidity. Pairs with red meat, sausage, game and pasta Bolognese.

The Bertolino family has been making wine for four generations. In 1961 Villa Bauda in Incisa Scapaccino was acquired by Agostino Bertolino and this marked the beginning of Tenuta Olim Bauda. In 1968, Diana (administration), Dino (winemaker) and Gianni (commercial and customer relations) began to manage the company. They renovated the cellar adjacent to the villa, installing state-of-the-art technology. Currently the winery includes 6 farms (approximately 100 ha) with one-third planted with vines at altitudes of up to 350 meters.

The soil is composed of sand and clay. Most of the land was planted between 1950-1980 with new vineyards added in the mid-1990s. Giuseppe Caviola is the oenologist, and Federico Curtaz is the agronomist for the winery and he has almost totally eliminated chemical substances and herbicides.

The fruit is hand- harvested between the first/second week in October and crushed in the evening of the day they are harvested then placed in temperature controlled stainless steel tanks. Upon the completion of the alcoholic fermentation, the wine is transferred to French oak barrels with a capacity of 25 hl and is aged for 30 months. After bottling, the wine continues to age.

The Nizza has been awarded 3 Bichieri – given only to outstanding wines from the Italian wine magazine Gambero Rosso for 3 vintages. Tenuta Olim Bauda – the only producer to achieve this recognition.