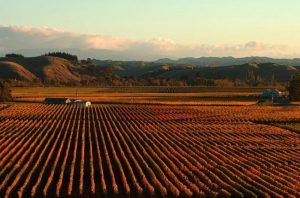 Three acres to feed one sheep?  It’s not much.  Good-quality lowland pasture in the UK should support five sheep per hectare, equating to 12 per acre.  I make this brief detour into husbandry simply to point out just how poor and stony this zone of Hawke’s Bay in New Zealand’s North Island is. In pre-vine days, the low sheep load made Gimblett Gravels the region’s cheapest land.

No one other than gravel extractors wanted it until the first Chenin Blanc and Müller-Thurgau vines were planted in the late 1970s – and for some time after.  Pioneer Alan Limmer of Stonecroft had to fight a battle with quarrying company Fraser Shingle to get the area zoned for viticulture; he only won in 1992.  The serious red-wine-making for which Gimblett Gravels is known today is just three decades old.

Every new wine-region needs a head-turning debutante.  It was C.J.Pask’s 1985 and 1986 red blend, based on Bordeaux varietals, which played this role, sweeping awards at New Zealand’s national wine shows.  Chris Pask had failed with Bordeaux varieties planted elsewhere in Hawke’s Bay: over-fertile soils created profuse canopies and unripe fruit.  He thought he’d give the stony stuff a try – and it worked.  It later emerged that this zone was just a little warmer than other parts of Hawke’s Bay.

These early struggles gave the region a drive and a cohesiveness which resulted in ‘Gimblett Gravels’ becoming a communally owned trademark.  There are no official sub-zones of Hawke’s Bay, so the trademark is a pre-emptive move and perhaps a model for other sub-zones elsewhere in the country to follow.

The 800-ha geographical zone was defined by “soil type and its interaction with mesoclimatic conditions”, and anyone with a vineyard lying at least 95 per cent inside the zone can apply to become a member.  The zoning covers all the local gravel types, but excludes an area of pumice sands.  If members want to use Gimblett Gravels name on a label, they must prove that 95 per cent of the grapes used for a wine come from within the zone.  “No other controls over viticultural or winemaking methods are prescribed or indeed needed,” the Association confidently announces.  “Internal peer pressure and a natural competitive spirit along with the appropriate legislative controls will ensure basic quality standards are met and indeed advanced.”

For the last few years, the Association members have circulated a sample case selected annually by Andrew Caillard MW – an excellent idea, since the carbon footprint of a surface-shipped case of wine is much lower than transporting human palates around the globe.  I last wrote about the case of 2013 wines back in January 2016, and since then have had a chance to look at the 2014 and, more recently, 2015 selections.  The case is made up of Bordeaux blends and varietal Syrah wines, though the balance between the two groups varies each year.  (This year a minority were under screwcap.)  Tasting notes for the 2015 selection are given below, but here are a few general observations.

I don’t see why those running Sacred Hill, Babich or Villa Maria shouldn’t hope, one day, to sell Gimblett Gravels Cabernet blends at the same price as middle-ranking Médoc classed growths or Napa Cabernets.  If they’re going to do this, though, the wines will need more structure, density and tannic mass allied to impeccable full ripeness – more ‘authority’, if you like.  The same goes for any producer of Syrah who might wish one day to compete head on with leading Rhône producers’ Cornas or Hermitage.

It’s important, of course, that every terroir finds its voice – but these structural elements are hallmarks of all of the world’s finest ageworthy reds.  Vine age?  Planting densities?  Skin-optimising viticulture?  Yields? Further use of whole-bunch for Syrah?  Harvesting practices and fruit sorting?  The style of extraction or the length of maceration?  IPT analyses; a consulting gig?  May it’s one of these; maybe it’s all of them – but that’s the next stage.  Can Gimblett Gravels do this?

The post Jefford on Monday: Weighing up Gimblett Gravels appeared first on Decanter.

NEWER POSTPre-French Revolution wines to be sold at auction
OLDER POSTBaron Edmond de Rothschild wine: When the name is the story