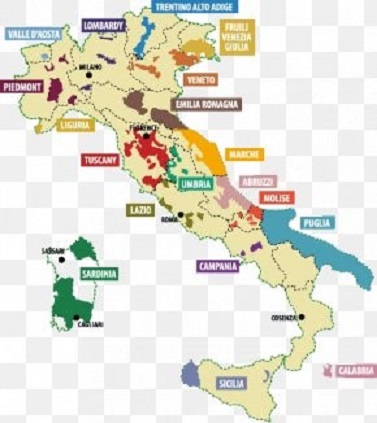 Lugana, located in the vinicultural region of northern Italy, sits at the southern end of Lake Garda. Lugana, derived from the Latin Lacus Lucanus (lake in the woods) is noted for its wines, and the region also offers incredible tourism opportunities as the religious influences from the Middle Ages especially in the towns of San Benedetto di Lugana, San Vigilie di Lugana and San Martino di Lugana are well preserved and accessible.

Research suggests that ancient grape seeds found in Peschiera del Garda are from vines grown in this area since the Bronze Age (or before). The white wines are also documented in Andrea Bacci’s 1595 book, De Naturali Vinorum Historia (On the Natural History of Wines). In addition, Lugana was the first D.O.C. registered in Lombardy, and one of the earliest in Italy.

Currently the Lugana DOC is comprised of 2700 acres of vineyards that run from the fishing villages and castle-filled towns of Desenzano to Peschiera, and include parts of Lonato, Pozzolengo and Simione. An important factor supporting the Lugana vinous success is its mild microclimate, unusual for northern Italy as the weather is tempered by the Lake and while the summers are hot, they are not scorching and the winters are mild. The Lake keeps spring frosts at bay and there is always a breeze keeping the vineyards ventilated and grapes healthy all the way through to the harvest.

A large part of the area’s soil (approximately 5,436 acres under vine) are on low-lying plains with dense soil that covers a bed of mineral–rich moraine. Light colored soil of glacial origins tied to the creation of Lake Garda confers minerality to the wines, as well as savory notes, longevity and structure.

Lugana Denominazione di Origine Controllata (DOC) wines account for approximately 90 percent of total production, and the remaining areas are designated as Superiore or Riserva releases, or produced as sparkling or late-harvest selections. More than 17.5 million bottles were produced in 2018 with 70 percent exported to the US – the denomination’s 4th largest market.

Grapes. What Is in a Name

Until the early 2000s the grapes from this region was called Trebbiano di Lugana or Trebbiano di Soave. However, local producers and wine experts thought it was not the correct identification and recent DNA tests determined that the grape’s genome boasts characteristics inconsistent with other Trebbianos (a close relative of Verdicchio). Because Turbiana is different than the other grape varieties it was renamed Turbiana, the local name for this indigenous variety. It ripens late and thrives in the lake microclimate and produces less than many other varieties (a factor in quality winemaking). The DOC permits up to 10 percent of other non-aromatic white varieties in Lugana; however, nearly all producers use Turbiana exclusively.

The grapes and the wines they produce are praised for their freshness, fruit concentration, underlying floral and spice notes and light acidity. Crisp and floral, the wines offer juicy citrus, white stone fruit and almonds. Lugana Superiore’s are aged for one year and present wild herb and saline notes. Riserva’s, released after 2 years of aging, present flinty mineral and spice.

Most wines are vinified in stainless steel with prolonged skin contact on the lees. Superiore and Riserva are frequently aged in both steel and wood – adding complexity without overwhelming oak. Lugana can age for 2-3 years with Superiore and Riserva selections developing well for many years.

At a recent Lugana focused wine event in Manhattan I was introduced to the wines of the region. The following are a few of my personal favorites.

Roveglia was started by the Swiss industrialist, Federico Zweifel, who moved to Lombardy at the end of the 19th century. He acquired the farmhouse, Cascina Roveglia, grew grapes and made wine for his private use on a small scale. In the early nineties the winery was renovated, old vines repaired and supplemented with new Trebbiano vines. His son, Giusto Zweifel, took over the leadership of the vineyard.

In the 1980s a new generation stepped in and son-in-law, Giovanni Felice Azzone, a member of the Lincean Academy (Italy’s Royal Society), brought research, science and technology to winemaking. This vineyard is the most extensive in the area of Lugana, south of Lake Garda (175 acres of vineyards within the more than 245 acres of the estate), and is one of the few in the heart of the earlier Premier Cru zone of the former DOC Lugana.

Today the estate is led by the fourth generation of the Zweifel family. Viticulture and production are controlled by Paolo Fabiani and Cesare Ferrari. Under their direction, Tenuta Roveglia Lugana Limne has become one of the best-known wines in the Lugana region with Gambero Rosso consistently awarding the estate Two Glasses.

Gentle yellow to the eye, fragrant and refreshing to the nose, this savory white opens with delicate scents of white spring flowers, orchard fruit and a whisper of crushed herb. The tangy palate presents white peaches, yellow pears and a hint of nectarine that lingers on to the crisp finish. Pair with poultry, light pasta, and seafood (think shrimp and white bean bruschetta).

Azienda Agricol Ottella started in 1880 by the Montresor family who had been growing grapes for generations. The vineyard is located at the southern end of Lake Garda, near Peshiera del Garda in the DOC (northwest Italy). The name Ottella is derived from a legend – that octuplets were born at the farm in the 16th century.

The winery remains in the family and is owned by Lodovico, Francesco and Michele Montresor. They manage 25 ha (61.75 acres) of Trebbiano di Lugana (Turbiana). The soil is of glacial origin with varying layers of sediment – thin layers of loamy and rough clay. The family also owns a small parcel, Le Creete, planted on a white chalky soil.

Ottella is one of the region’s main producers and defender of its old vines. La Creete bottling is made with fruit from vines that are more than 50-years old. White clay soils force vines to produce fewer berries and the lower yields leads to fruit with more concentrated flavors, richly textured and full-bodied.

Harvest and selection of the grapes is done by hand. There is delicate soft pressing of the whole bunch for most of the production, the rest with gentle destemming by oscillation. Strict protocol of vinification is followed; racking is introduced for natural sedimentation, with slow, temperate-controlled fermentation; fining for 6-8 months on fine lees.

Warm golden straw yellow to the eye. The nose finds green grass, forests, resin, the freshness of a spring rain, plus hints of pineapple and grapefruit with minerality. This unique and creative wine brings a slightly tart end to the palate experience (a good thing). Pair with marine and freshwater fish or Asian cuisine.

During the Roman period, the locale was named Selva (wild place) Capuzza (cap/ head) and may be derived from its high position at the beginning of the hills of Lake Garda’s morainic amphitheater. Today, Selva Capuzza is a wine estate located at the southern end of Lake Garda. From the 15th century country house the winery produces wines in three DOC appellations: Lugana, San Martino della Battaglia and Garda Classico.

Luca Formentini is the owner of the estate and the president of Lugana’s Conzorzio. The Formentini family works only with native grape varieties. The estate wines are all made in the cellar that 2001 was built with the purpose of facilitating all the phases of wine-making from the pressing of the grapes through the vinification and aging to bottling.

All the wines are made by a team directed by Luca Formentini. There is no use of herbicides. Vineyards have wide grass paths and the grass and vines are trimmed to produce compost to return organic matter to the soil. The woods are preserved, along with 2 ponds and bushes to protect the indigenous flora. The property offers an ecosystem oasis where hunting is forbidden and the native fauna are permitted to grow. To avoid water spillage and waste almost all vineyards are equipped with a drip irrigation system, coupled with careful management system for humidity.

The vineyard works to reduce pollution and minimize CO2 emissions, becoming one of the first wineries to track its carbon footprint. For example: The maximum bottle weight for still wines is 550 gr.; however, the average weight is lower because glass weight is one of the most relevant causes of pollution in the wine industry.

Consultants, suppliers and employees are obtained locally. Products are used from recycled materials and electric power is supplied from certified renewable sources. The western side of the cellar is covered by a vertical garden to cool the inside temperature and helps to reduce the buildings impact on the landscape. Southern and eastern sides are covered by a natural hill. Only paper boxes from recycled paper are used and no plastic labels are permitted; for printing – watercolors are selected.

The wine is produced from the oldest and highest vineyard – Selva is one of the first single vineyard Lugana ever produced. The vineyard presents important elements: altitude (110-125 mslm), hill incline and stones to allow the clay in the soil to be more permeable. The wine is bottled at the beginning of spring and remains in the cellar to mature.

The eye is aware of light gold trending to green hues and the nose is delighted with the green aroma of grass and flowers in springtime with traces of white peaches, yellow apples and pears. Bone dry with fresh acidity, light body and good balance. Long graphite and crushed rocks on the finish. Perfect poolside and paired with shellfish, chicken, anchovies, and a cold pasta salad.

The event was attended by hundreds of wine trade professionals, including wine makers, buyers/sellers, sommeliers, wine writers and others interested in the industry.