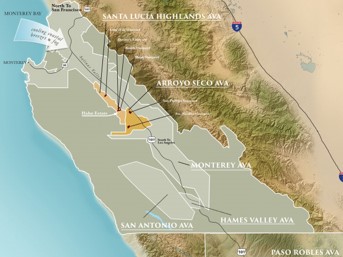 Monterey County Wines: Where Wine-making is a Family Affair

What is there to know about Monterey County? First of all, it is in California… always a good starting point for a discussion of wine. When we drill down in the locale, we discover the beauty of Big Sur’s rugged shore; the beaches and artists in Carmel by the Sea; tide pools, and golf at Pebble Beach; and the rugged marine history of Cannery Row and Monterey Bay. Monterey County, specifically Monterey County wines, has long been a tourist destination attracting 4.6 million visitors annually, generating $2.8 billion in spending which supports 25,220 jobs.

What sometimes gets overlooked in the macro-view of the County is that a combination of heat from the sun, ancient terroir and a mélange of traditional and innovative techniques used by growers and winemakers, makes the region a perfect area for producing world-class wines and the industry in Monterey County is valued at $1 billion each year. The Santa Lucia Highlands region and producers are making some of the best wines in California with more than 359 vineyards and 82 bonded wineries (an increase of 46 percent since 2012). There are more vineyards planted in Monterey than Napa (45,990), and Paso Robles (26,000 acres).

The Monterey wine story begins with the Franciscan friars from the Spanish mission of Soledad who planted wine grapes over 200 years ago. Sadly, these grapes died but the idea of a wine industry remained strong, and today over 40,000 acres of soil are growing grapes for wine.

The re-awakening is fairly new and started in the early 1960s when Professor A.J. Winkler, a vinicultural authority from the University of California at Davis, published a report classifying grape growing districts by climate. Monterey County was designated as Region I and II, comparable with the premium regions of Napa, Sonoma, Burgundy and Bordeaux. Recognizing the enormous potential of this research, Wente, Mirassou, Paul Masson, J. Lohr and Chalone started vineyards planted in sizes that ranged from sixty to several thousand acres, making it one of the largest premium wine grapes growing regions in California.

Beginning in 2007, Philip Hahn, (heir to the Hahn family winery), has been the CEO of the operation. Philip spent his early years on the family’s SLH vineyard estate, learning about the wine industry from the ground – up and started pruning vines in winter and picking grapes in the fall. He left the vineyard to study international politics at the Georgetown University School of Foreign Service. This was followed by an 8-year journey on Wall Street, returning to the family wine estate in 2007. He continued his studies at Columbia, earning a Master’s degree in biotechnology in 2012.

Hahn was recently in Manhattan on a public relations tour. His mission – to give a heads-up to east coast wine consumers…there are delicious wines being made in Monterey, California, and it is time to bring a few bottles home to enjoy, and for restauranteurs and food/beverage managers to add Hahn wines to their wine lists. Currently the Hahn family is the largest vineyard owner and producer in the region and also maintains a 50,000-acre wildlife preserve in Kenya, saving wildlife and strengthening the economy. Total production of all Hahn Family Wines is about 400,000 cases annually from winery facilities in Soledad and Lodi (Cycles Gladiator label), making the winery one of the top thirty producers in North America.

The current success of the Hahn brand was started by Nicolaus (Nicky) Hahn who was born in 1936 in Switzerland, the son of a Jewish banker from Frankfurt, Germany who moved to escape the Nazis. Hahn spent his childhood moving through England, Spain, Portugal, Cuba and Los Angeles. He attended grade school in NY, high school in Switzerland and university in Munich where he studied economics and met his wife Gaby. Hahn had a successful career in Paris and New York, and chaired Computer Associates, an international computer software company in London prior to moving to Monterey County.

Hahn was interested in pioneering – finding something that had not been done before and in 1979 Nicolaus and Gaby Hahn purchased a former horse and cattle ranch in the hills above California’s Salinas Valley, an area known for agriculture but not grape growing. Hahn became the wine pioneer of the Santa Lucia Highlands and the man responsible for the appellation designation in the 1991.

Hahn was able to turn the loam and granite hillsides of the east-facing slopes of Santa Lucia Highlands into world-class vineyards. His first attempt focused on Bordeaux varietals and then he realized that the cool climate was better for Burgundy and he turned to Chardonnay and Pinot in the late 1990s. The sloping hills provide good drainage while the terrain and soil characteristics are suitable for planting, cultivating and harvesting grapes far away from urbanization. Soil temperatures are cooler than other parts of the state which limits the size of the crop and increases grape and wine quality.

Because the plantings are relatively new, the vineyard masters in Monterey County have been able to combine years of experimentation and the best of proven traditional methods with modern technology and scientific research, creating a unique wine region in the USA.

There are enough warm days, a short frost season and small chances of unseasonable and damaging rains. A major attribute is the cool air from Monterey Bay, creating a longer growing season. Air in the southern part of the country warms at noon each day and rises, cool air from the Bay fills the void left by the rising warm air.

Monterey County grapevines produce buds in the spring, 2 weeks earlier than vines in other regions and the fall harvest begins 2 weeks later than other regions. Local grapes remain on the vine a full month longer, developing the characteristic intensity of flavor. The slowing maturing fruit offers intense varietal flavors and an ideal sugar-acid balance, creating a unique product of quality Monterey County wines.

County viticulturists frequently encourage ripening of the fruit by raising the canopy which covers the grape bunches in order to balance the relationship between hang time and ripening. A small rainfall allows grape growers to control the amount of water the vines receive. By utilizing some form of water distribution system (drip or sprinkler), growers are able to control the grapevines and offer water when it is needed and withhold it in order to concentrate the flavors.

Mechanical harvesting is popular because of its efficiency. The harvester gently vibrates the vines and allows the grapes to drop onto a conveyor belt. The primary benefit of this process is that once the grapes are ripe and have ideal sugar-acid balance – the grapes can be picked and delivered to the winery as soon as possible. The grapes are moved to a bin and either crushed and pressed immediately in the vineyard or trucked to the winery for fermentation. This task is typically done at night because of the cooler temperatures.

A benefit of multi-generational farming is a sincere commitment to sustainability and a willingness to combine technology with tradition in order to create an expressive, single-vineyard wine that meets the appellation’s sterling reputation.

Tony Baldini, President, Hahn Family Wines and President, Board of Directors, The Santa Lucia Highlands Wines Artisans organization. Baldini was formerly associated with Constellation Wines (Franciscan Estate and Mount Veeder, Napa Valley) and earned his BA in economics from University of California @ Davis and an MBA from the University of California at Berkeley, Haas School of Business.

All the grapes grown in Monterey County are wine grapes and noted for their intense varietal flavor and the good news is that this flavor profile is found in Monterey County wines. Chardonnay is important and makes up 40 percent of the total grape acreage. The northern part of the country is planted in Chardonnay, Pinot Noir, Riesling and Pinot Blanc. The southern part finds Cabernet Sauvignon (the second largest variety), Merlot and Zinfandel.

After harvest, barrel-aged 12 months in 60 percent new French oak. The wines are considered vegan as there are no fining agents or other animal by-products used in the production of the Hahn wines.

The Smith Ranch was first a horse ranch and the Hooks Ranch raised cattle. The properties were discovered when the Hahn’s were exploring locations to grow Cabernet Sauvignon. Since they liked the weather and the view of the Salinas Valley, in 1974 they acquired the ranches and started the Smith & Hook winery. The first Cabernet Sauvignon was produced in 1979.

Mahogany red to the eye, the nose finds the deep aromas of old red roses, blackberry, cherry, vanilla and toasted oak. The soft tannins caress the palate, presenting lots for fruit and oak that leads to a memorable finish.  Pair with steak, roast beef and roasted chicken.

Notes. Mahogany red trending to pink to the eye. The nose is rewarded with roses, cherries, wet rocks, leather, spice, leather, mocha, oak and dark soil while the palate discovers florals and rich red fruit offset by light tannins and minerality that moderate the sweetness and directs the experience to a lengthy finish. Pair with beef, veal, and poultry.

If you are at the Smith vineyard and look to the highest elevation – you will discover the vines that thrive along the mountain ridges and valleys. It is a winning combination of sun, and deep alluvial soils that produces a Pinot Noir that pops with luscious dark fruit, lively acidity and silk-like texture on the palate.

The goal of Lucienne is to produce premium Pinot Noir in small lots from exceptional estate vineyards including Lone Oak Vineyard and Doctor’s Vineyard. The winery takes its name from Nicky Hann’s middle name, Lucien, but in the feminine form to honor the namesake of the Santa Lucia Mountain range where the vineyards are located.

Ruby red to the eye, the nose discovers red roses, earth, berries, spice and cedar. The palate happily enjoys cherries, cola and dried herbs leading to a complex finish that is aided by lots of tannins.

Plum to garnet color to the eye, the nose finds blackberries, cherries, vanilla, sage, and wet leaves, directing the palate to experience soft tannins, that temper the boldness of fruit and flowers moving on to a deliciously cherry-focused minerality on the finish. Pair with chicken and turkey