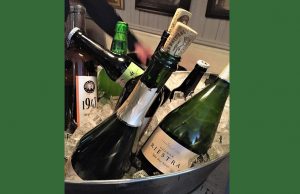 Move over wine and beer. Time for Spanish Cider

Have you become bored with wine and beer? Tired of the stress associated with placing the wine order at the wine shop or determining the appropriate artisanal beer for pairing with dinner at a restaurant? Cheer up! There is a new kid on the block, direct from Spain: Apple Cider.

It is thought that cider was well known by the Hebrews, Egyptians and Greeks. Plinio (23-79 AD) speaks of drinks done with pears and apples and mentions wine, “…is the typical drink of the territory”; Estrabon, about 60 years before Christ, writes that the Astures used cider because they had little wine while Palladium (3rd century), finds that the Romans prepared pear wine and included production details. The first evidence about cider made in Asturies was from the Greek geographer Strabo in 60 BC.

Sidra (cider) from the Espana Verde region of Spain dates to the end of the 11th century when the area was unfavorable for grape cultivation. Farmers planted apple orchards instead of grapes and started cider production. Over time, Asturias and the Basque region developed a strong cider tradition and now the area defines Spanish cider with Asturias responsible for more than 80 percent of the entire production. The residents of the Principality of Asturias consume 54 liters (14.26 gallons) per person per year.

Spanish cider (Sidra) is differentiated from similar products made in the USA, the UK and France by the following characteristics:

3. Fermented naturally, without added sugars or sweeteners and usually still, not sparkling

5. Served from a standard 750ml bottle

6. “Throwing the cider.” Instead of opening the bottle and letting it breathe, the server pours the cider from a height of approximately 3 feet to aerate and enhance the aroma and flavor. 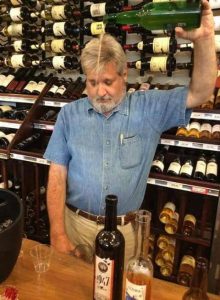 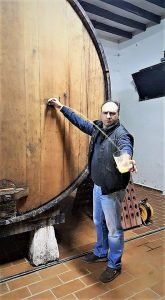 1. Sidra Natural. Traditional style dry hard cider fermented with indigenous yeasts (found in the apples, the orchards and the cidery); bottled without filtration; low alcohol content (5-8 percent); earthy and rustic to the eye and palate

2. Sidra Achampanada. Requires a second fermentation (in the bottle or tank). The process increases the alcohol content and displays effervescence; dry and sparkling

Apples are collected from the end of September until the middle of November using the kizkia, a tool that resembles a stick with a nail in it.

The apples are crushed into pomace in the matxaka (shredder) but without cracking the seeds (to avoid a bitter taste). The pulp (patsa) is then transferred to a press and the must (muztioa) is collected (or caught on the ground floor) in a vat (tina) in the medieval style (sagardotegi). It is then processed and stored in barrels (usually chestnut) in the storage area to mature.

The must undergoes two fermentations:

1. Alcoholic fermentation. An anaerobic process where the natural sugar is converted to alcohol. This lasts, depending on the circumstances, between 10 days to 1.5 months.

2. The malic acid is converted to lactic acid and reduces the sourness of the cider and makes it drinkable. The fermentation takes between 2-4 months.

The apple must or apple juice is from the low sugar indigenous apples (up to 20 different varieties), made from water and sugar, malic acid, citrus, tannin, pectin, nitrogen, minerals, vitamins (including C, B2, D, etc.) and enzymes in dissolution. During the fermentation process the sugar is transformed into carbonic anhydride and alcohol creating a product that is generally low in alcohol between 4-6 percent with a clearly fresh character that makes it particularly desirable.

There have recently been some technical advances but most of the well-known cider houses try to keep the essentials of the antique process. They make unfiltered cider from a blend of apples that are naturally fermented by natural yeasts from their skins. Natural cider is therefore still, a little cloudy and quite tannic and acidic, particularly in the Basque Country.

1. Aroma. Typically fresh citric and floral and perhaps the aroma of aged cheese and butter

3. Espalme. Foam must disappear quickly from the top of the cider

4. Pegue. Thin film adhering to the sides of the glass after drinking

5. Mouthfeel. Medium-bodies without sweetness; light to moderate carbonation (depends on height of the pour). The palate experiences acidity and tangy, lemon and citrus; little to zero astringency or bitterness. After taste may suggest a scratchy or throat experience due to acetic acid 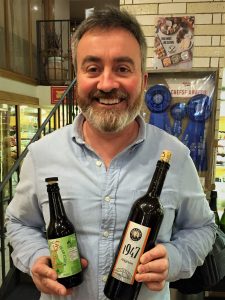 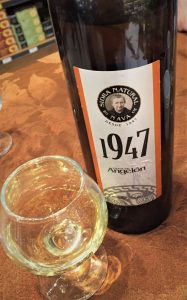 • Clear to gold to the eye with medium-sized effervescence. A hint of cooked apples to the nose that quickly leads to a suggestion of acidity. On the palate it offers a delicious balance or flavor and tannins with a slight hint of residual sugar. The finish brings a lingering memory of sour apples, citrus, a hint of vinegar (in a good way), and herbs in a slightly dense structure. Pair with Brie and Camembert. 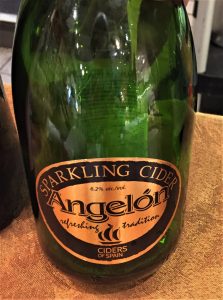 Matured cider is selected from the bodega for a second fermentation to produce a naturally sparkling dry cider that preserves the original earthy flavor of traditional Sidra.

• To the eye a hue of light gold with champagne style bubbles. The nose detects bread and ripe apples, plus a hint of sour citrus and minerality. The palate is refreshed with the fizz of bubbles that carries a light taste of apples. 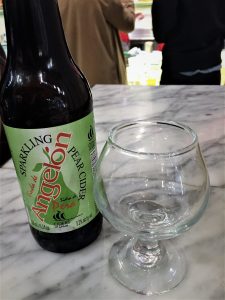 3. Viuda de Angelon Sidra Brut. Off dry, sparkling pear cider (AKA Perry) ABV 5.2 percent
The perry pear is the foundation for pear cider and carries a gritty, tannic and acidic quality that is similar to cider apples. The perry pear tannins are rounder than cider apples with less malic acid (organic acid contributes to the pleasant sour taste of fruits) and leaves us a less tart but desirable beverage. 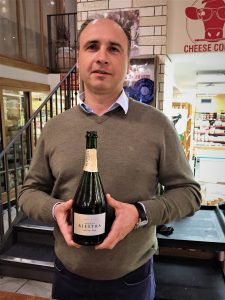 The first cider produced by family was in 1906 by Robustiano Riesta. The recipe and process was continued by his daughter, Etelvina Riesta who, with her husband, Ricardo Riestra Hortal, modernized production. Currently the ciders are owned and managed by Raul and Ruben Riestra, the great grandsons of the founder. In 2012 the company released its first sparkling cider, Sidra Guzman Riestra. It is produced using the Champagne method. 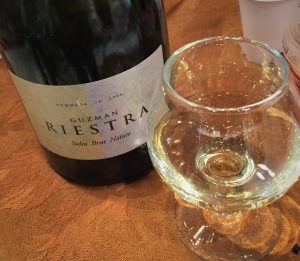 • To the eye, golden yellow while the nose finds threads of pears and bananas. The palate is delighted with tropical fruit. French apples in the blend contribute an extra touch of tannic tartness. 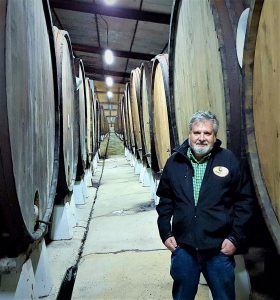