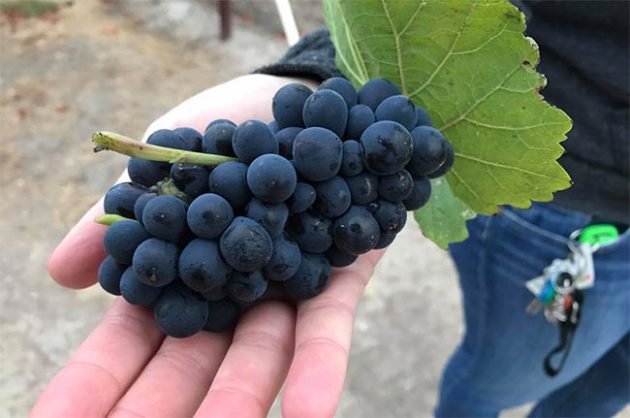 Sparkling wine producers in California’s Napa Valley have started the 2017 wine harvest, giving thanks for a relatively untroubled growing season compared to many wineries in Europe.

Pickers have started on the Pinot Noir at Mumm Napa, and harvesting also began at Domaine Carneros, the California estates of Champagne houses Mumm and Taittinger respectively.

Winemaker Ludovic Dervin enjoys celebrating the first truckload of grapes at its Rutherford winery by sabering a bottle of sparkling wine.

A classic but ‘frisky’ year

‘So far it is a classic Napa Valley vintage here,’ said Mumm’s Dervin.

It’s early days with many grape varieties across California still in the ripening stage.

Californians may be thankful to have avoided the kind of devastating frost and hail that has afflicted their European counterparts this year; albeit a ‘freak’ hailstorm did hit the Napa area on 11 June and there have been record-breaking heatwaves across the US west coast in recent weeks, similar to those in Europe.

‘One vintner described his vines as being quite frisky this year.’

The ripening period in recent weeks has been marked consistently by cold nights and warm, sunny afternoons, Dervin said.

This high diurnal range helps to maintain acidity and primary fruit flavours in the grapes for sparkling wines, which are generally harvested earlier to retain good acidity and before sugar levels rise too high.

Napa vineyards in general have progressed at a more normal pace in 2017 compared to the last two years.

Mumm’s first grapes were picked around one week earlier in 2016 and more than two weeks earlier in 2015, when harvest began on 22 July.

‘Sauvignon Blanc and other aromatic white wine grapes will start to hit crush pads in the next 14 – 20 days,’ it added.

Several other black and white varieties have come through veraison – changing colour at the beginning of ripening – in the past week, as shown by the Syrah at Lagier Meredith estate on Mt Veeder (pictured above).

Hail stones the size of walnuts…

Buy your favourite French wine while you can…