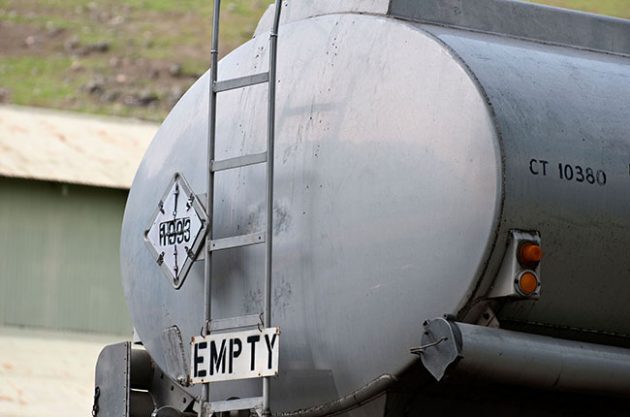 Tanker driver siphoned off thousands of litres of wine – report

A tanker driver was arrested last week after allegedly siphoning off several thousand litres of wine into a basement on his parents’ property near Carcassonne, south west France.

The driver siphoned off wine from the tanker to a basement. Credit: Ivo Roospold / Alamy Stock Photo

Following a call-out to an altercation two kilometres east of Carcassonne, police found two men fighting in front of a 28,000L (litre) wine tanker parked outside a house with a 30m flexible pipe running from the tanker’s valves into the basement of the house’s garage.

One of the men, from a tanker company based in Montredon-des-Corbières, near Narbonne, more than 60km further east, had confronted one of his drivers outside the house of the driver’s parents.

According to regional newspaper L’Independant,  he had suspected the driver of appropriating hundreds of litres of wine over the course of several months, or possibly years.

Further investigation reportedly found a series of 20L buckets full of wine stored in the basement, plus around 100 buckets hidden outside the garage and more arranged under a tarpaulin on the back of a truck.

The tanker itself was believed to have been topped up with water, the newspaper reported, citing unnamed sources.

The tanker driver, 52, and his parents, both in their 70s, were brought into police custody under suspicion of embezzlement and sale of the wine.

Both parents were released without charge after the driver pleaded guilty, admitting the embezzled wine was used to barter goods. He faces trial in February 2018, reported L’Independant.