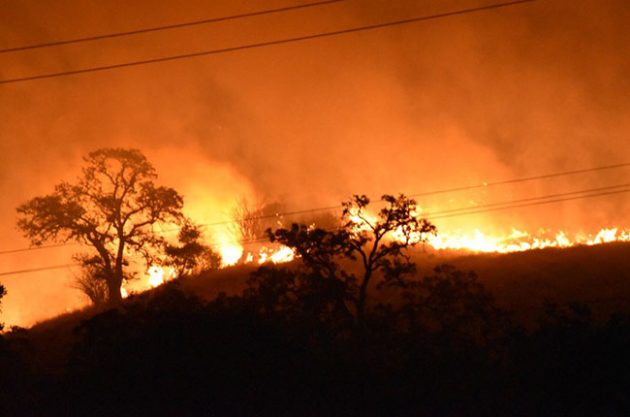 Multiple producers have said that the fire that broke out Sunday night in Napa Valley is worse than the fire caused by the major 1989 earthquake and much worse than the damage seen from the recent 2014 earthquake. It had been reported that well-known wineries such as Signorello Estate have burned to the ground with others being threatened such as, Chimney Rock and Darioush on the Silverado Trail.

‘The speed of the fire is what’s incredible, as well as the winds that swirled it back around,’ said Allison Steltzner of the Napa-based Steltzner Vineyards.

And as a result, she noted that in the town of Yountville, ‘trees just snapped’ in two. She evacuated her vineyard at 12:30 last night with her children. Her vineyard manager stayed until the early hours to fight the fire and then joined colleagues to try to save other people and property along the Silverado Trail, which is one of the region’s two main North-South arteries.

The off-the-record word was that many producers didn’t really know the level of damage that had been done—as the nine-mile trajectory from Trancas Street in the town of Napa to Yountville Cross Road, remains closed. Many high-profile appellations such as Altas Peak lie along that road.

‘As of now, we do not have any verifiable information regarding vineyard acreage or winery buildings burned. We are assessing information on how the fires might affect the 2017 harvest and the wine industry specifically, but it will be some time before we have any specific information along these lines.’

Secondary fires have also been brewing, such as the ‘Tubbs Fire’, which started in the Sonoma region of Santa Rosa and is reportedly heading towards the town of Sonoma itself.

‘Our members seem to be OK,’ said Joyce Stavert, the executive director of Oakville Winegrowers, which represents 72 wineries and growers, although they have struggled to reach some people.

Many vintners were out with hoses to tame the flames last night, said Nancy Bialek, the executive director of the Stags’ Leap Winegrowers, which has 17 winery members. The fire department  didn’t come as they were focused on more populous areas and ‘life over property.’

Sletztner added that, ‘no one is trying to save any structures; police were just going in to evacuate people.’

Bialek added that the good news, at least in the Stags’ Leap AVA, is that half to 70 percent of the harvest is finished. Although ‘there is going to be a lot of loss in the vineyard because ash penetrates the grapes.’ Napa Valley Vintners also stated that the majority of Napa Valley’s grapes were picked before the fires started last night.

However, many other appellations had much more acreage still on the vine.

Steltzner said she thinks that Napa Valley residents will band together after the fires are put out. ‘There will be a large push to come back and enjoy the Valley.’