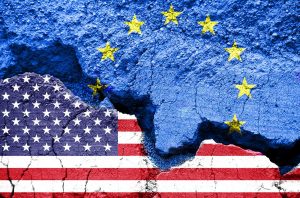 Will a Biden presidency cut US tariffs on EU wine?

Biden himself is known to be teetotal, yet some in the trade believe a Biden administration could give wine drinkers another reason to cheer, by ending the 25% US import tariff on several European wines imposed in October 2019.

Burgundy, Bordeaux and Rioja have been among the high-profile targets of $7.5bn in tariffs imposed on EU goods in retaliation for illegal subsidies paid to Airbus. A 25% levy applies to French, Spanish, German and UK still wines at 14% abv or below.

In September, Tony Blinken, foreign policy adviser to the Biden 2020 campaign, spoke of the need to improve trade relations with the EU, as reported by Politico.

Yet there are no guarantees that this will mean an end to the recently-imposed tariffs, and any change could take time.

Matthew O’Connell, head of investment at the BI Fine Wine & Spirits merchant, said there was an expectation that a Biden administration would reverse the 25% wine import tariffs.

However, he told Decanter.com that he didn’t necessarily see this happening immediately, particularly given the many pressing issues on the government’s agenda, and that it may take until mid-2021 or perhaps longer.

Any removal of tariffs would impact the market, he believes. There is ‘real pent-up demand in the US’ from collectors, some of whom may seek to replenish their cellars with Burgundy and Bordeaux, he said.

France’s wine and spirits export body, FEVS, said that still wine exporters have lost around €400m in sales in the year since the 25% tariffs were introduced.

Relations between the EU and US appeared to sour further this week, after Brussels said it had received World Trade Organisation backing to impose $4bn of tariffs on US goods.

American wines escaped sanctions, according to trade bodies, but the dispute is a parallel case concerning subsidies paid to US firm Boeing.

Both sides have said they wish to reach a negotiated settlement over the long-running aerospace trade spat.

However, Biden could face Congressional opposition to any tariff cuts and has also spoken of prioritising domestic policy issues over new trade deals abroad, according to Edward Alden, writing in Foreign Policy this month.

US wine retailers say tariffs hurt domestic businesses. A decision by the Office of the US Trade Representative in August this year to maintain the 25% wine levies was ‘a blow to American wine businesses and restaurants’, said Ben Aneff, president of the US Wine Trade Alliance and managing partner at New York’s Tribeca Wine Merchants, at the time.

This week, two leading trade bodies – the CEEV in Europe and the US Wine Institute – renewed their calls for a resolution.

‘The glass is half empty,’ said Jean-Marie Barillère, president of CEEV. ‘While the EU has, fortunately, decided to spare US wines from punitive tariffs, EU wines have been hit by additional tariffs [in the US] for months, causing irreparable damage to wine companies and the whole supply chain.’

Bobby Koch, president and CEO of the California-based Wine Institute, praised the European Commission for not imposing tariffs on US wines.

He added, ‘Wine is a truly unique agricultural product and for many years we have steadfastly urged all governments to refrain from targeting wine in disputes involving other sectors.’

The wider issue of wine tariffs has frequently made headlines in recent years.

Beyond the EU-US dispute, wine companies have been following trade discussions between the UK and EU over Brexit, while deteriorating relations between China and Australia have led to concerns that Australian wine might be targeted by Chinese officials. Wine has also been embroiled in a trade war between the US and China.

The post Will a Biden presidency cut US tariffs on EU wine? appeared first on Decanter.