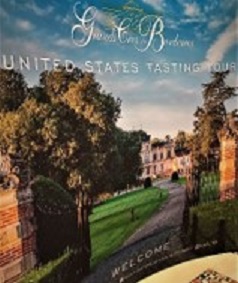 You are Elegant and Sophisticated? Pour Bordeaux into Your Glass!

Bordeaux, formerly known as Burdigala, dates back to the 3rd century when the Celtic tribes decided to settle in a beautiful spot, located on the western coast of the Baronne River. Latin Poet, Ausonius, first recorded mention of wine production in Bordeaux in AD 350 and a château still bears his name, the “Château Ausone.”

In addition to the natural grandeur, it was a transit point between the Atlantic Ocean, the Mediterranean Sea and the Iberian Peninsula. As wine making was initiated and trade grew, the residents became prosperous. Others found the locale delightful and by 56 AD, Julius Caesar and his lieutenant, Crassus, had conquered the area and prosperity continued to increase, making the city a major commercial center during the Roman Empire.

For the next 3 centuries the wine trade developed as did massive building and construction, including an amphitheater, temples, and luxurious homes, making it one of the largest cities in south Gaul with a population of over 20,000.

During the following centuries, Bordeaux experienced a complex mix of politics, economics, and love affairs – finally arriving at the 12th century – a golden age for the city. Artisans settled in the faubourgs, (the parts of the town outside the walls),  the wine trade, conducted mainly with the English, was the main reason for the accumulation of wealth by the bourgeois of the Bordelaise and it marked the beginning of a democracy, allowing citizens to have a role in local government.

Grapevines have been growing in the Bordeaux region for more than 2000 years. During the Roman occupation a resistant grapevine was imported (perhaps from the Balkans), called Biturica. During the spread of Christianity, wine played a part in the religious services and, as the population grew – so did the increase in grape growing. Claret, a dark rose wine prized by the English court, established a monopoly of wine exported to England and vine growing expanded to Fronsac, Saint-Emillion, Cadilac, Langon.

The cultivation of grapes, and the production of wine in Bordeaux was unlike other French wine regions for here the industry was developed by merchants and not by monks.

During the 17th and 18th centuries the Dutch imported the wines of Bordeaux due to its long preservation qualities. It was also during this period that Dutch engineers drained the marshy Medoc and vineyards were planted creating Laffite, Latour and Margaux vineyards (approximately 1690). The early 18th century saw the rise of the Bordeaux merchant class and in 1855, Classification of the Medoc, Sauternes and Barsac was introduced. On the 18th of April 1855 the first official rating of the gran vis from Bordeaux was established on the occasion of the Universal Exhibition of Paris. The wine producers prospered until the mid-1870s, and the arrival of phylloxera.

From 1918 to 1930 Bordeaux was negatively impacted by the war and recession, the closure of the Russian market, and prohibition in the USA – forcing the sale of many Chateaux. By 1936, the economy started to improve and during this period, the Appellation Controllee for Bordeaux was established. Unfortunately, the years between 1940-1944 saw the German occupation of Bordeaux and it was not until 1955 that St. Emilion received its Classification and it was also the time for the emergence of St Emilion and Pomerol as important regions.

By 1959 there was a reclassification of the red/white wines of the Graves (first done in 1953). In the 1960s there was a re-emergence of important export markets and money began to be reinvested in vineyards and chateaux were revitalized.

Unfortunately, Bordeaux experienced the stock market crash of 1973 and the wine trading export company Cruse scandal that focused on charges of illegal use of chemicals to upgrade products and mislabeling the wines (resulting in a 240-page verdict and 8 convictions).

The scandal reduced the US demand for Bordeaux wine (back to 1969 levels) and many chateau producers (who had not played a role in the deception) suffered the consequences. Traders stopped dealing the negociants, returning to the direct sales methods. The négociant system (Place de Bordeaux) had been the Bordeaux business model. Chateaux sold allocations to négociants every spring following the harvest and they, in turn, were in charge of selling and distributing the wine to wholesalers, importers and merchants.

The government, responding to the scandal, introduced tighter regulations and added importance to the phrase, “mis en bouteille au chateau,” encouraging minimal intermediary involvement. Many négociants were saved from bankruptcy by foreign investment, heralding the beginning of corporate chateaux. By 1982 global economies had begun to improve and legendary vintages prospered along with global affluence.

Bordeaux is the largest wine growing region in France and includes approximately 280,000 acres of vineyards, 6,100 estate owners and growers and 100 (+/-) superstar chateaux that provide the reputation of a vintage. It is the wine from these estates that draws attention of the world to the region, especially in the spring, during en primeur when the newest wines are available first for tasting and later for purchase as futures.

Traditionally a French chateau is used to describe a grand country house owned by an aristocratic family; however, in Bordeaux, the term is used to describe a wine estate with its own winery and vineyards. Some chateau (i.e., Margaux and Haut-Brion), do have a manor house and many have only a small house or two for the owners and workers.

Research for the Wine Industry

Ulysse Ribereau-Gayon (University of Bordeaux), the former assistant to Louis Pasteur, found the solution to mildew with Bouille Bordelaise, a mixture of copper sulphate and lime. Bordeaux is also the birthplace for the science of winemaking, oenology. Ribereau-Gayon’s grandson, Jean, started the first Institute of Oenology at Bordeaux University (1949) and, with Emile Peynaud, discovered malolactic fermentation. This work continues at the Faculty of Oenology of Bordeaux based at the Institute of the Science of Vine and Wine (ISVV).

Bordeaux is at the forefront of research and technology, although it has a reputation for resisting change. Organic farming has become the norm in French regions like Roussillon, Provence and Bergerac; however, Bordeaux has been slow in accepting the concept with only a small fraction – less than 9 percent (Bordeaux Wine Council) of its 122,000 ha of vineyards certified as organic.

Historically, organic wine was viewed as a niche product that increased expenses and lowered the quality. It was frequently called wine for Bobos (bourgeois bohemians). Increasing media coverage of diseases caused by pesticides sparked a new look and appreciation for biodynamic and sustainable farming practices; however, Industry leaders claim that the reluctance to change is the weather which is mild and the very humid Atlantic climate brings pests (i.e., powdery and downy mildew, flavescence doree, botrytis and grapevine months).

Recognizing the necessity to move forward, in 2018, there were 608 organically certified producers of AOC Bordeaux and 47 certified biodynamic vineyards motivated, in part, by public health lawsuits in Bordeaux involving vineyard chemicals have pressured the conversion to organic and biodynamic practices in the region.

Go to Your Left and/or Your Right

The Left Bank is located south and west of the Garonne and Gironde Rivers, while the Right Bank is located north and east of the Dordogne and Gironde rivers (Entre-Deux Mers occupies the less prestigious region between the Dordogne and the Garonne). The Left Bank includes Grave and Medoc (with its prestigious sub-appellations of Margaux, St Julien, Pauillac and St. Estephe) vineyards dominated by Cabernet Sauvignon. The Right Bank featured appellations are St -Emilon, Pomerol, Merlot and Cabernet are favorites here.

Since 1973 the Union des Grands Crus de Bordeaux, a group of 134 major chateaux located in the most important appellations in the Gironde, Medoc, Graves and Pessac-Leognan Sauternes and Barsa, Saint Emilion and Pomerol have been marketing their wines domestically and internationally, working with distributors, brokers and merchants. The organization also promotes French culture, meeting with over 50,000 professionals and wine lovers each year, presenting their latest vintages.

The recent event in Manhattan attracted a large number of wine trade professionals including wine makers, sommeliers, masters of wine educators, writers and reviewers, wine buyers/sellers and importers and distributors.

Chateau Chantegrive started in 1966 by Henri Leveque. The vineyard is a collection of parcels with many different terroirs in Southern Graves. Ninety-six ha of vines makes this Chateau one of the largest and most prestigious vineyards in the Graves appellation. Since 1985, the Chateaux has been a member of the Union and has been a leader since 2006 thanks to the expertise and guidance of Hubert de Bouard, a world-famous oenologist and owner of Chateau Angelus Saint Emilion.

Dark ruby red to the eye, the nose is entertained with the aroma of ripe cherries, wet rocks, damp wood and rich dirt. The palate is delighted with soft and silky tannins, leading to a hearty, long and delicious finish. Pair with red meat, poultry, Asian cuisine, tuna fish, pasta and mild cheese.

Grapes are optically sorted before vinification. More than half of the whole berries are vinified in large, open-top oak fermenters with the remaining grapes fermented in cement tanks. Extraction is obtained through pigeage, (the wine making process that takes place during the initial stages of fermentation when the cap of the grape starts to appear on top of the vat in which the wine ferments. The floating grape solids are punched, pressed or pushed back into the wine several times for the extraction of color, flavor and tannin from the cap grapes and the process of extraction).

The maceration lasts from 30-35 days with malolactic fermentation occurring in the barrel. The wine is aged in 70 percent new French oak barrels for an average of 18 months before bottling. The first 6 months of the aging has the wine remaining on its post malolactic lees, adding richness to the wine.

The Chateau is named after the person who is credited with solving the phylloxera epidemic by grafting vines onto rootstock. This process saved St. Emilion and much of Bordeaux as well as the vineyards of Europe from the phylloxera attack. The vineyard is currently owned by Benoit and Bruno Corre and Marie Jacques Charpentier. In 1990 Stephane Derenoncourt became part of the Chateau team followed by Nicolas Thienpont (1994) and they are responsible for making the Chateau one of the world’s finest vineyards.

The total area under vine is 30 ha (74 acres) with an average vine age of 40 years. Vines are replanted individually, with the varietal mix approximately 70 percent Cabernet Sauvignon, 30 percent Merlot. For the grand vin, the grapes are hand harvested and fermented in a temperature-controlled steel tanks. Barrel aging occurs over 16 months in 40 percent new oak with malolactic fermentation occurring during this period.

The Chateaux is derived from the estate’s location and historical owner with Haut Bages referring to its position at the top of the Bages plateau between Pauillac and St Julien and Liberal referring to the family who owned the estate during the 18th century. Currently the vineyard is managed by Claire Villars Lurton, manager of Chateau Ferriere and Chateau La Gurge and the spouse of Gonzague Lurton, owner of Chateau Durfort Viviens.

The Liberal family started the estate at the beginning of the 18th century. They worked as an intermediary been wine producers and the market and accumulated wealth and vineyards. The estate was classified Cinquieme Cru Classe in the Classification of 1855.

Because of phylloxera during the next century, the reputation of the wines declined and the Great Depression ruined the business. The Societe Civile Charreules (owned by the Cruse family) purchased the estate in 1960 and for the next 10 years the vineyard plots adjoining Chateau Pontet Canet were transferred to Pontet under the control of Cruse. Cruse sold the estate to Jacques Merlaut (Tailan Group).

Ruby to dark red to the eye while the nose finds cherries, ripe raspberries, red plums, wet wood and the palate is happy with soft tannins highlighted by vanilla oak, spice, and cherries leading to a sweet finish. Pair with duck, game, roast chicken, roasts and veal.