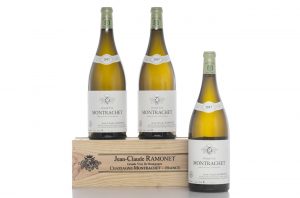 Zachys has announced details of its second London sale this year, following a debut in September after decades of auctions in New York and Hong Kong. It also represents the auction house’s first multi-vendor sale in Europe.

Named ‘London II’, it has a total estimated value of £2m and will take place on Saturday 14 November at 10 am GMT via a live video stream from their offices.

Les Sentieres is the smallest of the celebrated estate’s vineyards at 0.046ha and is situated next to the grand cru Bonnes Mares.

On average only one 228l barrel is produced each year, bottled in magnum and not made available for public sale. The auction presents a rare opportunity to purchase Fourrier’s entire Les Sentieres 2019 production and have it bottled in a format of choice. The buyer will also be invited to the Domaine for a barrel tasting experience with owners and husband and wife team Jean-Marie and Vicki Fourrier.

A rare collection of white Burgundy from producer Arnaud Ente is also offered including three limited-edition jeroboams of only eight ever produced; Meursault Goutte d`Or, Meursault Les Petits Charrons and Puligny Montrachet Les Referts all from the 2009 vintage. Three magnums of Domaine Jean-Claude Ramonet, Montrachet 2017, pictured, also feature at an estimate of £3,600- £5,500 ($4,769- $7,286) each.

Domaine-direct consignments from the cellars of Emidio Pepe and large formats and library bottlings from Marchesi Antinori will also be included.

Jeff Zacharia, president, Zachys commented: ‘Our ability to switch to online auctions and the popularity of our unique studio sales means this year has been tremendously successful, despite the global pandemic. The highlight was bringing the Zachys’ business to London for the first time with our debut European auction of wines from the celebrated Enoteca Pinchiorri cellar. We’re delighted to be able to offer Zachys’ clients some new, incredible lots in our November sale.’

Christy Erickson, head of Europe for Zachys said: ‘We were thrilled with the success of our London launch earlier this year and our first multi-vendor sale offers a unique collection of exquisite wines, as well as the first-ever barrel of Burgundy to be sold at auction. Our London debut represented a record for European participation, and we look forward to hosting many more auctions from Europe to service our clientele around the globe.’