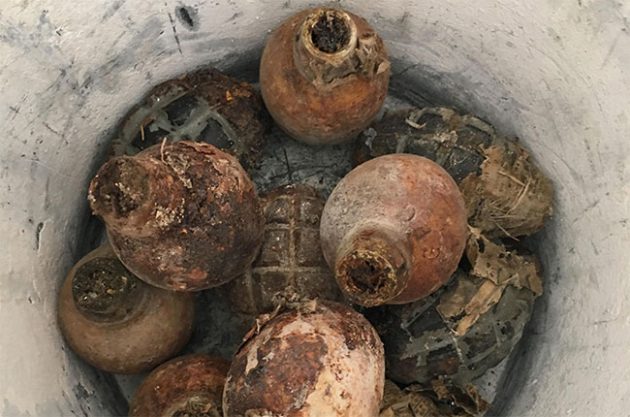 A stash of hand grenades from World War Two has been discovered near to St-Emilion vineyards and one of the first people to find out was Jane Anson, who was duly prompted to explore how Bordeaux’s Right Bank fared as a dividing line between the German Occupation and the Resistance in Vichy France.

We got a phone call a few weeks ago from a friend who is working on a renovation project in Montagne St-Emilion.

‘I’m standing here with a blow torch in one hand and the phone in the other, looking at a stash of what looks very much like abandoned hand grenades,’ is pretty much what I remember him saying.

‘Eleven hand grenades in all, lying unexploded in what will soon be their family house’

You’ll be happy to know that we were the third phone call after (a) his wife and (b) the police. The blow torch had been for welding in an outbuilding that was being converted into bedrooms, in a house that dates back to the 17th century but had not been lived in for decades.

Julian was working on tidying up an exposed stone wall, and while on a ladder happened to look into a row of small holes located under the wooden beams that held up the roof.

Inside, nestling at the back and covered in layers of dust, were what looked like carob pods, possibly put there, he imagined at first, by squirrels. He put his hand in to move them, and found instead they were cold and hard, clearly metal.

They turned out to be three hand grenades, pins still intact, laying in a small cluster. The same thing was repeated in each of the alcoves. Eleven hand grenades in all, lying unexploded in what will soon be their family house.

Once all had been removed and examined by the local ‘Deminage’ (mine-clearing) team, the grenades semed to be like a mixture of MK2 Pineapples used by the British army together with some of the smooth Model 39 Egg hand grenades developed by the Germans. They had almost certainly been stashed there by Resistance fighters during World War Two.

The mine-clearing team was, to be honest, fairly non-plussed about the whole event, telling our friends that they work across the entire southwest of France and are called to these events several times a week. The ‘iron harvest’ of unexploded ordnance is a well-documented part of French life having suffered as a battlefield through both world wars of the 20th century.

But it was a reminder that Bordeaux’s Right Bank, specifically Castillon and Entre deux Mers, was split through the middle during World War Two.

It was here that the Demarcation line, created at midnight on the morning of June 25, 1940, a few days after the signing of the Armistice between Germany and France, established an occupied and a ‘free’ zone right across the country.

Barsac, Sauternes, Libourne, St-Emilion, the Médoc, most of Graves, the city centre and the strategic Atlantic coast were all occupied, while much of the Libournais and Entre deux Mers was split in two. St-Emilion was occupied, with notably Châteaux Soutard, Trottevielle, Clos Fourtet and Ausone requisitioned by German soldiers, although most of the troops were in Libourne. There are a few excellent Michelin maps, specifically numbers 98 and 99, created in 1940 and 1941, that show the exact line (printed during war time, so eventually without covers as there was not enough available paper). Our friends’ house was on the Occupied side of the line.

The Germans set up a whole series of measures to limit the circulation of the people, goods and postal traffic between two zones either side of the Demarcation Line – locals remember that for first year after the Armistice, it was impossible to telephone or even send a postcard from one side of the line to the other.

Over in the Médoc, the first châteaux to be occupied were those with British or Jewish links (most famously those belonging to the Sichels, the Bartons, the Rothschilds), but much of the region suffered enormously in terms of access not only to winemaking manpower and equipment but basic food, as detailed in my much-thumbed copy of Wine and War.

I am lucky enough to have been given by the late Jean-Paul Gardère a copy of his war-time diaries. A former courtier and director of Château Latour, he writes of how 1941 ‘was undoubtedly the most difficult year of the war. I am sure the administration did what it could, but a lead weight lay across France’. He wrote that the population, ‘lived in permanent fear, struck dumb and in daily worry of finding food’.

Against this backdrop, Resistance grew, and perhaps inevitably because of the Demarcation Line, it was on the Right Bank that much of it took place. Five Gironde parliamentarians were among the 80 across France who said no to the Armistice, and who called it treasonous.  One of these was Jean-Emmanuel Roy, mayor of Naujan et Postiac in Entre deux Mers and himself a winemaker who was instrumental in the founding of France’s appellation laws.

Yves Damécourt, owner of Château de Bellevue and mayor of Sauveterre de Guyenne, has been instrumental in keeping the memories of the Resistance fighters alive. The town’s Porte St Léger gate marks the exact spot where the guard post was stationed, and a memorial plaque was erected in 2016. At the ceremony that accompanied its unveiling, Damécourt spoke of how the line remained in place until March 1, 1943, a few months after the invasion into the supposedly Free zone by the Germans.

Entre deux Mers was the site of particularly fierce acts of resistance and retributions. In 1944, fighters from the famous Grand-Pierre Resistance group were shot close to Blasimon abbey, while 25-year old Roger Teillet was caught and eventually hanged by the SS on the Place de Blasimon. On the night of July 10 1944, Resistance fighters were preparing to unload two planes worth of ammunition and parachutists from the British forces at St-Leger de Vignague near Sauveterre, but were intercepted, with many of them caught and killed.

In retribution, Auguste Bry’s family farm was burnt to the ground for his role in the event. Even as the Germans retreated after an Allied victory was declared, a few Resistance fighters confronted the retreating German troops and were killed – including 18 year old André Loiseau who died among the vines of Pomerol, according to witnesses who told their stories to the Historical Society of St-Emilion.

And all the while, the business of making wine continued. Thierry Manoncourt of Château Figeac was sent to a disciplinary camp in 1940 after refusing to work as a labourer for the Germans. He came home to Figeac in 1943 to work the harvest, helping not just at his estate but those nearby. With so many men away fighting, his Figeac cellar master looked after the wines at Vieux Château Certan and others, trying to keep châteaux going until their workers could return.

Which brings us back to the grenades.

Julian bought the property from the Gaury family, seventh generation of winemakers in the area and owners today of Château Bellevue in the next door appellation of St Georges. They bought the property (only using the outbuilding for storage) in 1957, and were as surprised as he was at what was uncovered.

There are title deeds, apparently, which head further back and might reveal more – but in the meantime, the rather grisly discovery in a Montagne St-Emilion outbuilding can simply stand as a reminder of all the lives affected by the brutal line that cut through these vineyards.