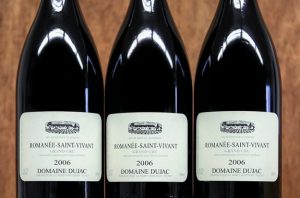 Burgundy master Clive Coates MW tells you everything that you need to know about Domaine Dujac, along with historical tasting notes on wines from top vintages – as part of a series that looks back at domaine profiles from Clive’s most recent books.

Unlike most Burgundian estates, whether they have been bottling for a number of decades or only embarked on this path recently, the Domaine Dujac is a recent creation. It dates from 1968. Jacques Seysses, the founder, is in his early 70s, and has now taken a back seat in favour of his sons Jeremy and Alec and Jeremy’s wife Diana, a trained wine chemist (oenologue). They have been working as a trio now for a few vintages.

Have things changed? Should we expect more radical differences in the wines to come compared with the Dujacs of old? I went up to Morey-St-Denis to find out.

Jacques Seysses’ father, a rich man in charge of a firm who made biscuits, was a well-known connoisseur of food and wine, at home in three-star restaurants, with a fine cellar of his own.

Jacques remembers as a teenager visits to three-star restaurants in Paris and elsewhere.

‘I can’t tell you exactly what was the first great bottle of wine I had,’ he says, ‘But it was most likely a Rousseau or a Gouges from one of the great vintages we had immediately after the War. What I do recall was a visit to  La Tour d’Argent. My father selected a bottle of La Tâche 1938 (not a great vintage). It was almost rosé in colour. Our guests were rather shocked. But the aroma and intensity of this wine was remarkable. This must have been in 1958 or so, when I was 17. I remember my father ordered that the rest of the stock be reserved for himself.’

Where to buy Clive Coates MW’s ‘My Favorite Burgundies’ book:

NEWER POSTJefford on Monday: Georgia – finding its path
OLDER POSTTen of the best restaurants in Valencia for wine lovers