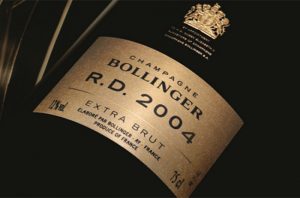 The official global launch of Bollinger RD 2004 Champagne took place this week and Decanter’s John Stimpfig was there to taste the latest vintage of the house’s famous prestige cuvée.

It is the 25th vintage of RD, which is always a vintage of La Grande Année that has been held back and given extended ageing on its lees in the Bollinger cellars.

Its famous initials stand for Recently Disgorged and was the concept and creation of Madame Lily Bollinger, who launched the very first 1952 vintage in 1967.

The company closely guards the amount of RD it makes from any given vintage. But both the vintages are rare and quantities are small.

Selection is therefore rigorous and severe with the fruit coming from 15-20 Grand Cru and Premier villages. Coming from Ay in the Vallée de la Marne, this year, the blend is 64% Pinot Noir and 36% Chardonnay.

The 2004 vintage was highly regarded in Champagne and was harvested in perfect conditions during an exceptional Indian summer. Only the juice of the first pressing is used and is fermented in oak.

This 2004 RD was then aged for more than thirteen years on its lees under cork before it was disgorged with a dosage of 3 g/l on the 20th November 2017.

Bollinger said that the RD 2004 would have a recommended selling price of £180 per bottle [retail] once physically released. Other retailers would include Berry Bros & Rudd and Amethus in the UK, it said.