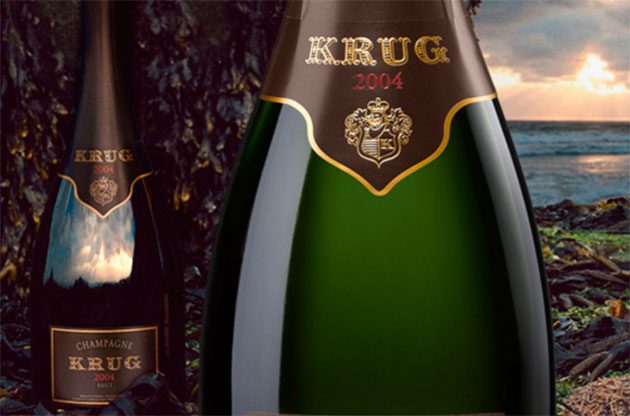 Michael Edwards was among the first group of journalists in the UK to taste Krug’s latest vintage release, the 2004, but was truly wowed by something else the Champagne house had up its sleeve…

Taking a break from the 2017 harvest, Olivier Krug was in London in early September to show his new baby, the Krug 2004 vintage Champagne.

Scroll down to read Michael Edwards’ rating of the Krug 2004 vintage, which was available in the UK at just under £250 per bottle this week

2004 was a year of luminous freshness, tension and stylish radiance, in a late September vendange of subtle complexities created by a longer time on the vine.

Autumnal early morning mists were ideal conditions in which to make particularly fine Chardonnays and fragrant Pinot Meuniers, as the vineyards regenerated themselves after the devastating spring frost and summer heatwave of 2003.

The new vintage was shown alongside the exceptional Grande Cuvée 160th Édition, an alternative expression of 2004 which, plays to the Krugs’ consummate art of blending the base wine with spectacular older reserves.

These reserves include some 130 wines from a dozen vintages, ranging from 2005 back to 1990, which showed an unrivalled richness that never overwhelmed the vigour and freshness of the younger components in the cuvée.

The 160th Édition was the star of the tasting, perfect to drink now.

Fresh, zesty spiced lemon and citrus notes of top Meunier and elegantly built Chardonnay, with a hint of honeysuckle and spice. Supremely…

A real firework of a Grande Cuvée set around the 2004 base, with intricacy from 12 different vintages in total dating back to 1990…

By Krug’s endlessly patient precepts, this is still a baby. The base is 2008, a great year that needs a lot more time for the assembled reserve…