French wine production from the 2017 harvest will fall to historic lows due to damage from spring frosts, officials have estimated. 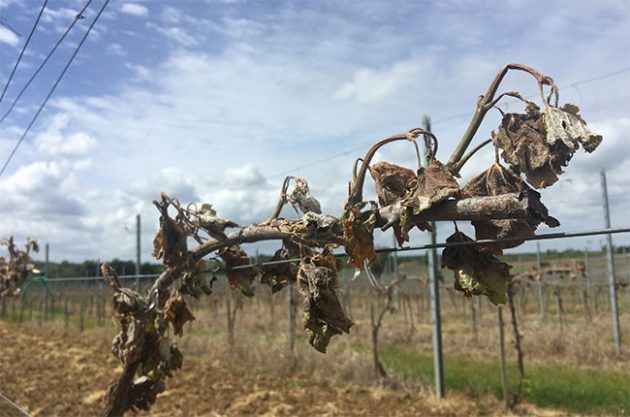 The aftermath of deadly frost in Ladaux, Bordeaux. Vines in many regions across Europe have also suffered similar fates. Credit: Jonathan Ducourt

Frost and hail are largely to blame.

This would be a ‘historic low’, said the ministry – 16% lower than the five-year average and worse than 1991, a vintage also hit hard by frost.

Such a drop could mean that wines from some areas become harder to find, and so more expensive. It is the second successive year that frost has struck hard in some areas.

Bordeaux 2017 production could be ‘strongly impacted’ by spring frosts with a 50% fall in production versus 2016, said the report. The Right Bank was hit harder. Many top estates had the resources to employ frost avoidance techniques, even flying helicopters over vines to circulate the air.

However, flowering went well. ‘Vines are two or three weeks ahead versus the average growing season,’ said Thomas Duclos, of Oenoteam in Libourne, on the Right Bank.

‘Veraison [ripening] started at the beginning of July,’ said Vincent Bache-Gabrielsen, winemaker of Château Pédesclaud in Pauillac. ‘Everything looks good.’

In Burgundy and Beaujolais, a good flowering period means production will rise by 14 percent versus a small 2016 crop, official said

But frost badly damaged parts of Chablis and the Côte de Nuits, and hailstorms devastated parts of Fleurie and other Beaujolais Crus.

At flowering, there was ‘a lot of coulure [poor fruit set] among Riesling grapes’, Celine Meyer, CEO of Domaine Josmeyer, told Decanter.com. ‘Pinot Gris are perfect for the moment,’ she added, but there was concern at low water levels.

In Languedoc-Roussillon, severe frost affected both the Aude and Hérault areas. Production is set to fall by 6%.

Coulure has been a particular problem for Grenache in Languedoc and also in Provence and the Southern Rhône Valley, which have also had problems with powdery mildew.

In the Loire, frost has cut production by 10% to 40% in some places. But, overall, the region’s growers are set to pick 15 days earlier than average and production will rise by 7 percent versus 2016, which was also hit by frost.

Hot early summer weather means that the growing season across France was running between 10 and 20 days ahead of normal, which may help surviving grapes to ripen fully.

Growers under pressure after temperatures plunge…