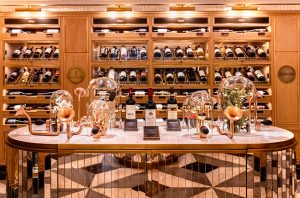 London luxury department store Harrods has opened its fine wine and spirits rooms, which include interactive features such as an ‘aroma table’ and were reportedly a ‘multi-million pound’ investment for the retailer.

The new Harrods wine rooms were designed by Martin Brudnizki Design Studio, taking inspiration from 1920s decor, and include a marble patterned floor.

‘The new rooms will break down barriers and change perceptions on the world of wines and spirits by focusing more on the flavour profile of the product, rather than the specific categories and brands,’ said Alex Dower, director of food and restaurants at Harrods.

The previous Harrods wine room had been in the basement of the department store, but was moved for a restaurant to be built.

In the new fine wines room, wines are categorised by terroir, to help customers explore wines from regions they previously hadn’t considered, according to a statement from Harrods.

There is also an ‘aroma table’ with scents to guide customers through the flavour profiles of different grapes.

Both the Champagne and sparkling wines room, and the spirits room are also arranged by flavour profile.

Cognac producer Louis XIII has opened its first boutique outside of Beijing within the spirits room, Harrods said.

There is also an ‘education’ room, with live streaming to vineyards and winemakers.