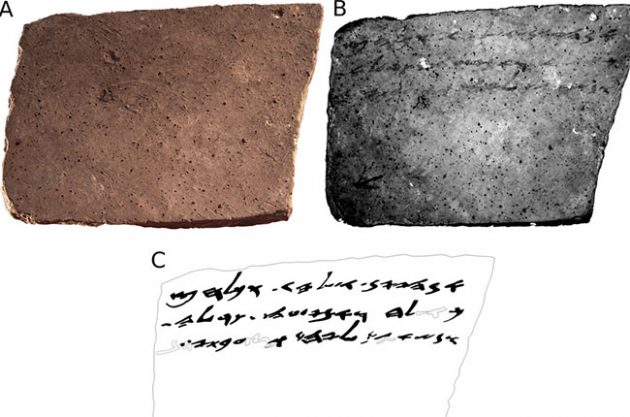 Scientists have revealed a hidden message on a fragment of ancient pottery on display in Israel, shedding more light on who was drinking wine 2,500 years ago in the region.

Scientists from Tel Aviv University used ground-breaking image technology to uncover an eroded message on the shard of pottery, found near the site of an ancient fortress and dating to around 600 BC.

Their research revealed an order for wine, oil and flour, most likely from soldiers stationed at the fortress, located near to the modern-day Israeli city of Arad.

For the wine world, the discovery adds to evidence of widespread wine consumption in the region at the time.

It is also a victory for multispectral imaging, which was successfully used by researchers to recover the message that had gone unnoticed despite the clay pot fragment being on display at an Israeli museum for half a century.

‘The text bears more than 50 characters, creating 17 new words,’ said researchers in a paper published on Public Library of Science (PLOS) One.

‘It begins with a request for wine – “If there is any wine, send [quantity]” – as well as a guarantee for assistance if the addressee has any requests of his own,’ researchers said.

It’s quite likely that the fortress was occupied by soldiers of the Kingdom of Judah, which was facing a tumultuous period that would ultimately lead to its demise in the same era.

Historians and archaeologists are building a picture of wine drinking and production in the region at this time.

Local wines were believed to have been dark and rich, although many had extra herbs and spices added, according to Dr Patrick McGovern, known as the ‘Indiana Jones of ancient wines’ and who is scientific director of the Biomolecular Archaeology Project at the University of Pennsylvania’s Museum of Archaeology and Anthropology in the US.

Italian researchers have re-planted a vineyard in central Milan that was believed to once belong to Leonardo da Vinci, and…

A 4,000-year-old wine cellar discovered in modern-day Israel was used to supply feasting revellers at an adjacent palace, researchers believe.

Researchers in Israel aim to re-create fine wine from the Byzantine Empire after finding 1,500-year-old grape seeds in a rubbish…