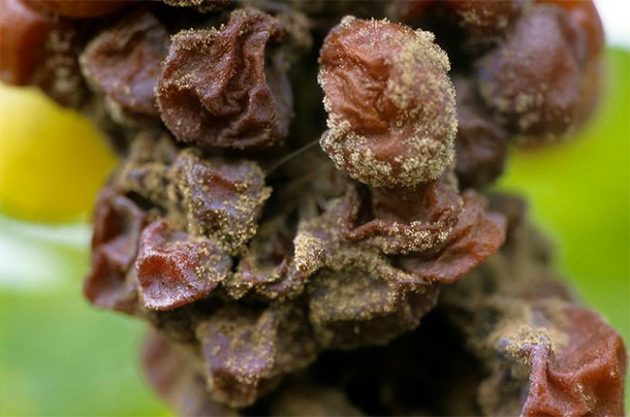 Scientists believe they have pin-pointed how different types of mould can affect the flavour in some of the world’s best sweet wines, from Sauternes to Tokaji.

Scientists in Germany have worked out why Botrytis cinerea is the noblest fungi affecting wine grapes. And they did it without tasting a drop of Sauternes or Tokaji Aszú.

Using wine produced from healthy and botrytis-infected Riesling, Roter Riesling and Gewürztraminer grapes, and healthy and powdery-mildew-infected hybrid Gm 8622-3, the researchers analysed the odorants in each sample and then got a panel of 10 sniffers, who had been trained for six months to recognise 90 odours, to rate them.

The researchers found that both bunch rot and powdery mildew caused subtle changes in the composition of aroma substances, which ‘significantly affected’ the wines’ aroma quality.

The study, published in Frontiers in Chemistry, found that bunch rot infection boosted the fruity-smelling lactones characteristic of Tokaji Aszú wines, as well as the curry-like smelling lactone sotolone.

They also found a slight increase in esters and alcohols, which might explain the increase of liquor-like and/or toasty notes.

Powdery mildew, on the other hand, resulted in decreased levels of vanillin, decanoic acid, and esters, and the wine scored poorly with the panel.

‘This negative rating was, however, not related to any specific off-note but was rather due to a lack of positive aromatic notes; in fact, the wine was described as being rather flat,’ said one of the researchers, Dr Andrea Buettner.

How much do you know about the wine trade and wine lovers’ coveted white grape? Take the quiz. See all Decanter.com…

Don’t get caught out at tastings….