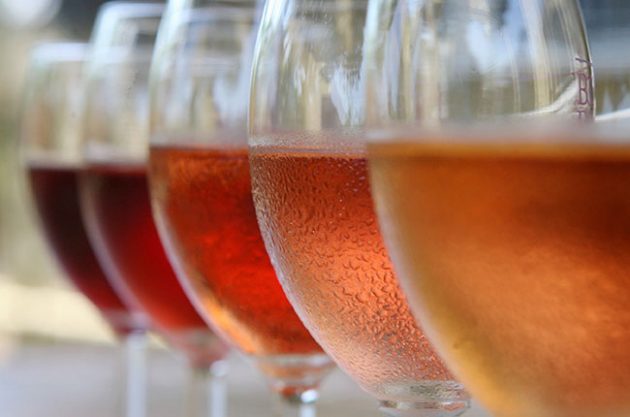 Jefford on Monday: The rosé which wasn’t pink enough

There’s a politics of wine colour, though it varies according to type and variety. Any darkly coloured Pinot is now viewed as an object of suspicion, though depth and opacity of colour are admired for the Cabernets, for Merlot and for Syrah. Cool-climate whites (and vinously correct whites wherever they may come from) strive to be ghost-like elisions of silver and of green — though the naturalistas are quite prepared to see whites sail serenely through straw yellow to deep gold before pushing on towards orange, carried along by the oxidative breeze. It’s when you get to rosé, though, that colour matters most.

Not illogically: the wine’s precise hue provides a higher percentage of the pleasure of rosé than it does of any other wine type, which is why most rosé is sold in clear glass bottles. But what sort of pink? Provence’s pale rosés constitute the new global benchmark: steel pink shot with silver or tiptoeing gracefully towards salmon. The most expensive court incredulity with almond hues which barely deign to suggest pink at all. Deep rosés, by contrast, are the mullets of the wine world.

You might think that all of this lies within the purview of the producer — who calibrates variety, pressing techniques, maceration and level of reductive handling to achieve the colour cherished in his or her mind’s eye. Mostly it is so. But not always, as the following story illustrates.

Gigondas is principally a red wine, but there is a rosé alternative — and the appellation cahier des charges stresses that it should be a ‘d’une couleur soutenue, rosé aux reflets violacés‘ (‘with a deep colour, rosé with violet glints’). “That, says Daniel Brunier of Vieux Telegraphe, who with his brother Frédéric is co-owner (with Kermit Lynch) of the Gigondas property Domaine Les Pallières, “means a rosé de saignée or a rosé de macération.” (Both ‘bleeding’ and maceration imply a period of skin contact.) “We wanted to make a pressed rosé, something very harmonious, not one that was heavy with maceration. I’ve got a horror of too much fruit. I wanted to make a wine that was like the red Pallières: a bit austere, reflecting the northern aspect of the vineyards. And since we have lots of white grapes and white wine isn’t included in the appellation, why not use some of those in the rosé?” This they have done: the Pallieres is about 30% Clairette. It’s a technique also used in Côtes de Provence, with notable success. (The Garrus cuvée of Ch d’Esclans is a Grenache-Vermentino blend, for example.)

There was only one problem: the pink wasn’t deep enough. The Bruniers received a warning for the 2014 vintage, while the 2015 was refused the appellation, at least initially, on the basis of its colour. (Technically speaking, too, pink Gigondas ought to be made from no more than 10 per cent white varieties, though this rule is principally applied to plantings rather than the precise blend.)

“When you ask for the appellaton,” says Daniel Brunier, “you have to go to the end of the tunnel; you have to climb out of the impasse. We insisted, and the wine was re-tasted and eventually we got the label for it. It was pale, it’s true, but it was balanced — and appreciated. It sold through in two months. And it wasn’t as if the colour was a fault. There isn’t even an image for the rosé of Gigondas yet. Everything is there to be created. We’re grown-up guys, and to have your ear twisted repeatedly is tedious. We didn’t want a hassle like that any more with a little wine, so we pulled it out of the appellation.” Pallières Rosé is now a ‘Vin de France’.

This is symptomatic of a wider issue concerning French appellation regulations. When most were instituted, ‘the rules’ were primarily there to help growers make better wines than they might otherwise do, left to their own devices. A secondary aim was appellation cohesion. Nowadays, though, most producers are well-trained in making good wine. In doing so, a sense of terroir emerges – which provides the very best sort of appellation cohesion. As in most areas of French life, a little more liberalism would be wise.

The Pallières estate was bought by the Brunier and Lynch families in 1998, and it occupies 130 ha on the slopes of the Dentelles de Montmirail — with just 25 ha of vines. “That’s what makes it magical,” says Daniel Brunier. “We have no vineyard neighbours. It’s mostly a mountain zone; some of the parcels don’t get to see the sun until 11 am.” The estate has a flock of 45 Rove goats, looked after by a husband-and-wife team. She’s the shepherdess and he makes the cheese — which is much admired: Pierre Gagnaire uses it, and it’s sold by the celebrated cheesemonger Claudine Vigier in Carpentras (La Fromagerie du Comtat). I asked if these goats made money for Pallières. Daniel Brunier laughed. “You have to have fun, otherwise life is dull.”

Notes on the Pallières wines are given below. The Brunier style is carefully considered and executed, but at the same time uncompromisingly indigenous, as at Vieux Télégraphe. ‘No pipes, no pumps, no screws’ is the winemaking motto; the aesthetic ideal is “to have the maximum wine in the wine”. Fermentation is in cement (60%) and big wood (40%, mainly for fruit from the older vines); Daniel Brunier uses both remontage (pumpovers) and déléstage (rack and return), but in “the softest way possible, to extract the least possible in the slowest way possible”. The wine is aged in large old oak vessels.

Brunier’s aesthetic of red-wine creation in France’s south is intriguing. “I don’t pay attention to acidity; acidity doesn’t interest me,” he says. “The lack of acidity is not a fault in great terroirs.” Instead he is looking for something aerial and light (which he insists is possible at higher alcohol levels), but lent structure and freshness by varying percentages of whole-bunch fruit (though the grapes are crushed on the bunches, using a special Brunier-designed machine which sunders skins without squeezing the stems).

The result is two red-wine cuvées (Terrasses du Diable is a higher-sited, younger vine cuvée grown between 300m and 350m, while Les Racines is grown at around 250m using ancient 80 to 100-year-old vines) of upland classicism, perfectly summarising the sprightliness and lifted energy which make Gigondas such a contrast to Chateauneuf itself. You will, of course, find more deeply coloured Gigondas reds, too — but greater liberality of expression seems to be allowed for Gigondas reds than rosés, and the Pallières reds proudly carry their appellation.

This blend of 30% Clairette with equal proportions of Grenache and Cinsault is vinified in used demi-muids of 650 litres, with wild yeast and no sulphur additions prior to bottling; it goes through malolactic. It’s a pale salmon-pink, with creamy scents and flavours which combine restrained peachy fruit with some vinous marrow and soft Rhône spice: quenching yet graceful. 91

The blend here is 85% Grenache with 10% Mourvèdre and the rest mixed plantings, grown at over 300 m, with around 32% whole bunch. It’s clear red in colour, with seductively warm strawberry and mace fruit. The palate is vivid yet fresh, the strawberry now qualified by bitter chocolate with nutmeg and liquorice depths. 90

This wine is made from the 80-100-year-old Grenache surrounding the property, together with around 10 per cent of other varieties, principally Syrah and Cinsault, which are co-planted and co-fermented with the Grenache. The whole bunch component can reach 40 per cent on occasion. Clear red in colour, with scents of dry grasses, warm stones and quiet plum fruits. On the palate, the wine is fresh, vivid and high-focus with ample, soft tannin and tapered depths; you may be reminded of cherry kernels as much as plum, or chocolate so dark it’s almost acid. For all that, it has a light, dancing balance. 93

As with the 2015s, the 2013 Terrasses du Diable comes across as the sweeter of the pair aromatically, though there is now a truffley undertow to the spiced fruits. On the palate, this wine has an edgier balance than the 2015: a cascade of poised, lively, peppery red fruit with vibrant acidity and a firm grip, too. 91

Clear red in colour, with similar high-country scrub scents to the 2013, and the warmth of summer’s end. In contrast to 2015, though, in this vintage the Racines seems a little less concentrated than Terrasses du Diable, though it more than makes up with its gravity of style and layered finesse. A dignified and articulate Gigondas with all the energy and freshness of the appellation. 91

In 30 years, our columnist has never seen this…