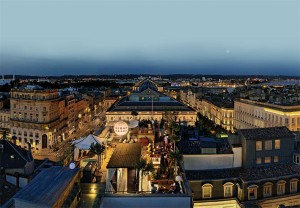 A new train route set to cut out the changeover in Paris and go direct from London to Bordeaux is in the advanced planning stages, according to train operators.

A new London to Bordeaux direct train service would bring the journey down to just over four hours, according to HS1, which runs the UK’s high speed rail route that carries the Eurostar from central London the English Channel.

The current quickest route, via the Eurostar, involves a one-hour changeover time in Paris, giving a total journey time of  five hours and 25 minutes.

The return Bordeaux – London route currently takes longer, more than six hours, due to the need for security checks during the Paris connection.

This new proposed route will avoid Paris and use a new high speed train line that links Tours with Bordeaux. The total journey time will be under 5 hours, HS1 said.

It said that it was currently in talks with international rail operators about the proposed route, and they hope it will be running in a few years.

‘The service will take passengers direct from city centre to city centre, taking the hassle out of travel to South West France,’ said Dyan Crowther, Chief Executive of HS1 Ltd.

‘As we’ve seen with the recent introduction of the Eurostar London-Amsterdam service, there’s a real demand for international train services to provide a comfortable and better-connected service, especially for leisure journeys.’

‘The route is almost ready for a train operator to turn up and turn the key as soon as the UK and French Governments agree on border controls.’

‘With the right commitment, we could be looking at new services in the next couple of years.

As well as proximity to vineyards, Bordeaux city offers many options for wine lovers.

There are Michelin-starred restaurants to dine at, and many others with strong wine lists.