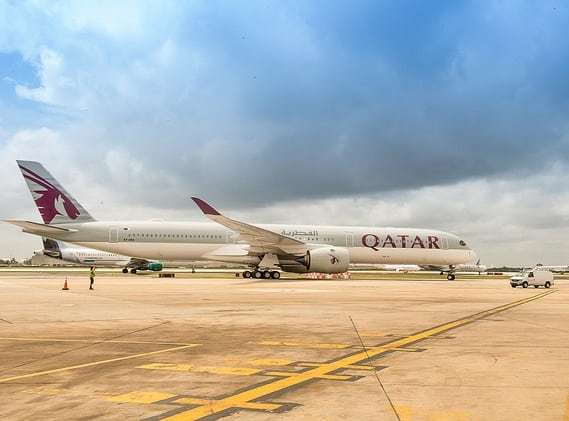 Qatar Airways brings the A350-1000 to the United States

Qatar Airways is delighted to bring the world’s most technologically advanced passenger aircraft, the A350-1000, to the United States for the first time, marking an extraordinary and historic moment in the aviation industry. The ultramodern aircraft touched down in Philadelphia on 23 July 2018, transporting the renowned German national football team, FC Bayern München, to the U.S. for the 2018 Audi Summer Tour.

Following the aircraft’s arrival in Philadelphia, the state-of-the-art A350-1000 will fly to Miami, where the star-studded football team’s second and final match during the pre-season U.S. tour will take place.

Qatar Airways Group Chief Executive, His Excellency Mr. Akbar Al Baker, said: “The arrival of our state-of-the-art A350-1000 in the U.S. for the first time is truly a monumental moment in our industry, and we are thrilled to bring the eminent FC Bayern München team to the U.S. for their 2018 U.S. tour. FC Bayern München is a team that celebrates ambition, initiative and the desire to exceed expectations – core values that Qatar Airways shares, clearly demonstrated through our acquisition of the world’s most technologically advanced aircraft, the A350-1000.”

Chief Executive Officer of FC Bayern München, Mr. Karl-Heinz Rummenigge, said: “FC Bayern München is very pleased to team up in a long-term partnership with Qatar Airways. Our new partner sets the highest standards in the airline industry. As a club, we have very close ties to our Bavarian culture and traditions of our hometown, the city of Munich. In recent years football has become a global sport, and FC Bayern München is reaching out to the growing number of fans all over the world. There is no better airline than Qatar Airways to reach these diverse international destinations.”

During the 2018 U.S. Tour, FC Bayern München will compete against Italian football club Juventus Turin in Philadelphia on 25 July 2018 and will face off against English football champions Manchester City in Miami on 28 July 2018.

Earlier this month, the award-winning airline became an FC Bayern platinum partner under a new long-term sponsorship agreement. The deal between Qatar Airways and FC Bayern München will see the airline’s signature logo adorning the jersey sleeves of the German record champion, further strengthening the already strong ties between the airline and Germany.

Qatar Airways is the global launch customer for the state-of-the-art A350-1000 aircraft, the latest member of the Airbus wide-body aircraft portfolio, which currently operates daily non-stop service between Doha and London. Beginning commercial operations in February 2018, the A350-1000 offers a total of 327 seats across two cabins, with 46 award-winning Qsuite Business Class seats and 281 18-inch extra wide Economy Class seats. The aircraft offers enhanced levels of passenger comfort, thanks to the lowest twin-engine noise level of any aircraft, advanced air conditioning technology and full LED mood lighting.

Like the A350-900, more than 70 percent of the A350-1000’s lightweight airframe is made from advanced materials combining composites (53 percent), titanium and advanced aluminum alloys. The aircraft’s carbon fiber reinforced plastic fuselage results in lower fuel burn, as well as easier maintenance. The A350-1000 also features a distinctive all-new, six-wheel main landing gear and four per cent larger wings.