Rovos Rail tourist train is on its way from Cape Town to Dar es Salaam in Tanzania on its annual vintage trip from the tip of the African continent to its heart, rolling through famous tourist attraction sites in southern Africa.

Reports from trip organizers said the train is due to arrive in Dar es Salaam Saturday mid-morning this week, July 15. This epic 2-week journey travels through South Africa, Botswana, Zimbabwe, Zambia, and Tanzania and is one of the most famous vintage trains in the world.

The journey begins in Cape Town taking guests to the historic village of Matjiesfontein, the diamond town of Kimberley, and the capital city of Pretoria and Madikwe Game Reserve in South Africa.

The train continues through Botswana into Zimbabwe for an overnight at the Victoria Falls Hotel, then crosses the mighty Zambezi River to Zambia and joins the Tanzania Zambia Railway to Chisimba Falls where guests enjoy a bush walk.

It enters the Tanzanian border then descends into the Great Rift Valley negotiating the tunnels, switchbacks, and viaducts of the spectacular escarpment in the Southern Highlands of Tanzania.

Mbeya, near the Zambia border, is the first welcoming city for the Rovos Rail train shortly after entering Tanzania.

From Mbeya, the train cuts across the Southern Highlands’ attractive sites including Livingstone Mountains, Kipengere Ranges, and the Great Rift Valley. It then descends into the Rift Valley, giving its passengers a chance to view and enjoy spectacular scenery as the train negotiates 23 tunnels before cutting through the center of the Selous Game Reserve, the largest wildlife game reserve in Africa.

Covering 6,100 kilometers, the 2-week tourist-tailored epic journey from Cape to Dar es Salaam takes place every year on a vintage Edwardian Train snaking through the southern to eastern parts of Africa on tourist missions. 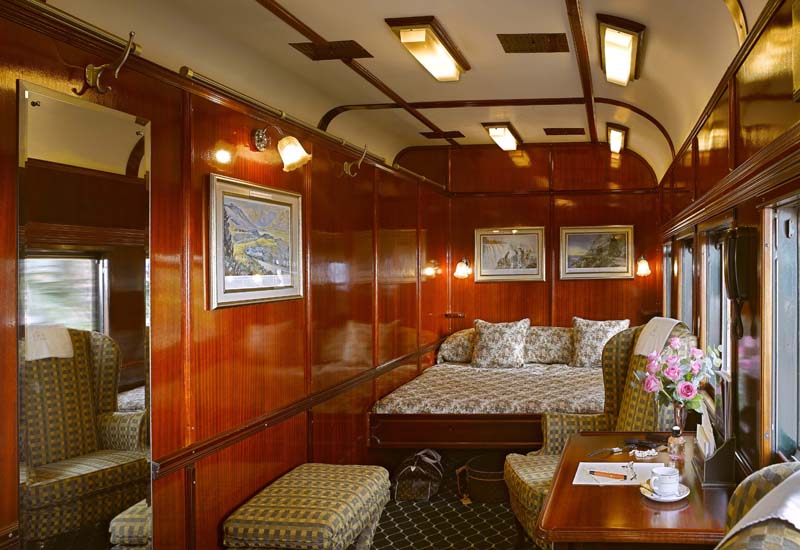 Known as the “Miracle railway,” the Tanzania-Zambia rail is among the longest and most modern railroads in Africa with pure Chinese technology. The 1,067-mm gauge railway covers a distance of 1,860 kilometers (1,160 miles) from Tanzania’s capital city of Dar es Salaam on the Indian Ocean coast to Zambia’s copper belt city of Kapiri-Mposhi.

It crosses and passes through spectacular features including the 23 tunnels cutting through the Eastern Arc ranges in the southern highlands of Tanzania and the Great Rift Valley rim. The longest tunnel covers 800 meters through rugged mountains.

These dark tunnels make the rail among most fascinating features any visitor could enjoy while snaking through 920 kilometers from Dar es Salaam to the Zambian border of Nakonde.

From Dar es Salaam to Kapiri Mposhi, the railway crosses or passes on over 300 bridges with stopovers in 147 stations.

It took 50,000 Chinese rail experts and engineers with other 60,000 Tanzanian and Zambia workers to lay down 330,000 tons of heavy steel rail to get this railway going. The workers moved 89 million cubic meters of earth and rock to complete the rail’s construction, including the laying down of 2,225 concrete culverts.

Twelve Chinese surveyors walked on foot through rugged landscapes and wild places for 9 months from Dar es Salaam to Mbeya in the Southern Highlands, covering about 900 kilometers, in order to choose and align the railway’s path. On the course of its construction, 65 Chinese railway experts and engineers died.

It was 1970 when the first bar of a steel rail was laid down in Dar es Salaam to start the 5-year tedious work to lay down the rail. In October 1975, the last bar of steel was laid at Kapiri-Mposhi in Zambia, to complete this hard but noble work of the construction of 1,860.5 kilometers of the railway, 2 years ahead of its completion.

Rovos Rail, or the “Pride of Africa,” is a luxurious train that follows Cecil Rhode’s trails from the Cape, passing through Southern Africa to Dar es Salaam and linking its passengers to other parts of Africa through other railway networks in Eastern Africa.

It is an exciting, and perhaps the only moment of a life-time ride on such a train pushed by steam engines and with old wooden coaches dating back to the late 1890s, but modified into a 5-star hotel with all the required first-class tourist facilities.

The old Edwardian Rovos Rail train rolls with 21 wooden coaches with a capacity to accommodate 72 passengers. The wooden coaches are aged between 70 and 100 years, and have been furnished into passenger-worthy carriages.

Owned by Rovos Rail Company, the vintage train made its first maiden trip to Dar es Salaam in July 1993 to complete Cecil Rhode’s dream of laying a railway line from Cape Town in South Africa to Cairo in Egypt, snaking across the African continent from the southernmost tip to the northern tip of this continent.