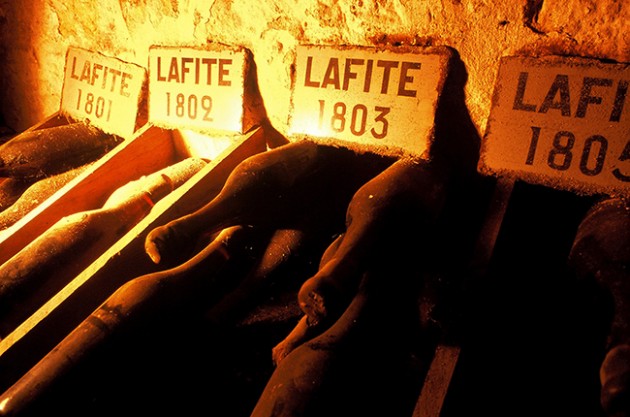 In a historic first, EM Lyon won the Left Bank Bordeaux Cup for a second consecutive year, the first time any university has won this prestigious wine tasting competition back to back.

Bottles of Lafite from the early 19th Century in the château cellars in Bordeaux.

On a hot cloudless evening the eight teams, who had fought hard to win a place at the final, were welcomed by Baron Eric de Rothschild, Grand Maitre, Emmanuel Cruse and other members of the Commanderie du Bontemps, on the well-raked gravel of Château Lafite-Rothschild.

The eight universities who qualified for the Commanderie-organised tournament’s final were:

For the first time, no British team made the final, a fact well commented on in the year of Brexit.

How the final was won

The competition was split into two parts: multiple choice questions and blind tasting.

This year’s questions were the most difficult I’ve witnessed since attending.

‘In the 18th century Mr Pierre Mitchell, owner of Château du Tertre, invented something. Was it a) the jeroboam, b) the Bordelaise barrel or c) the pruning shears?’

The answer was the jeroboam. Six of the universities answered correctly, which did make me wonder what they had been staying up all night reading.

Next question: How many regular bottles are produced from one hectare with a yield of 50 hectolitres after topping up? A) about 4,000 bottles, b) 6,000 bottles or c) 8,000 bottles.

The answer was 6,000 bottles. Only one team got it wrong leaving me and my press colleagues astonished at their knowledge.

With 20 points to win, six teams entered the second round of tasting tied with 16 points each.

Three flights of wine: find the vintage, the appellation and the Château. For example, ‘which was the Pape Clément in the Pessac Léognan flight?’ And ‘which Haut Médoc is it, Cantemerle, La Lagune or La Tour Carnet?’

Here the experience of EM Lyon came in as they notched up the highest number of points, closely followed by HEC Lausanne.  This is so often where the competition is won or lost.

After the last wine tasted the Commanderie, all dressed in their flowing robes, checked their maths.

A huge cheer went up as Baron Eric announced the winner was EM Lyon, with Lausanne second and Science Po third.  The Italian team Bocconi, who came 6th, told Decanter.com, ‘We are thrilled, we didn’t come last. We are definitely going to practice more and come back.’

With the competition over, the very best party in the wine world began.

One long candlelight table stretched down Lafite’s chais with huge dishes of oysters adorning the table, lobster and foie gras terrine followed with an array of Bordeaux’s finest wines including magnums of Lafite generously poured. Everyone was singing and dancing the night away to a live band under the barrels; no wonder every team wanted to come back. Why wouldn’t they?

Test your skills on this classic region…