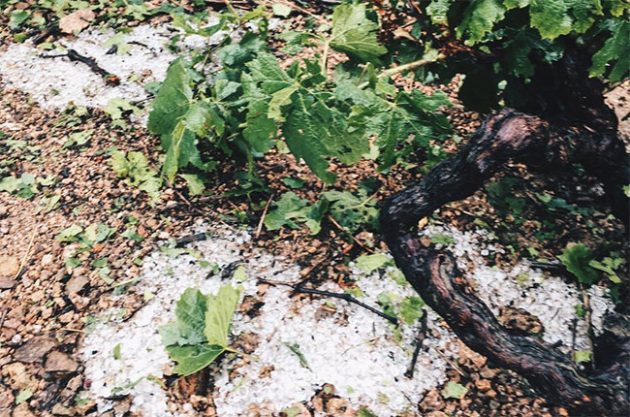 Some of the Beaujolais 2017 harvest may have been lost after vineyards were hit by a torrent of summer hail.

A fierce hailstorm hit the Beaujolais region at 4:45pm on 10 July.

It’s a case of déjà-vu for some producers after the same corridor of Beaujolais vineyards suffered from hail in June 2016, said Mélina Condy from region wine body InterBeaujolais.

‘But this is on a on a bigger and wider scale,’ she told Decanter.com.

Early signs suggested that Beaujolais Crus, situated in the north, were among the worst vineyard affected. From Beaujeu to Moulin-à-Vent, the storm impacted Chiroubles, the north of Régnié, Morgon, Chenas, Moulin-à-Vent and Fleurie.

The pretty village of Fleurie was particularly badly hit, with violent winds and a lot of houses and wineries damaged. The fire department was overwhelmed with calls for the entire night between Fleurie and Moulin-à-Vent.

‘It was a tornado; I have rarely seen this,’ said Dominique Piron, president of InterBeaujolais and owner of Domaine Piron.

Producers triggered anti-hail canons but these were not enough and the wine also caused damage. ‘The small hailstones and the wind had a sandblasting effect’ on the vines, Piron added.

InterBeaujolais officials and winemakers were assessing damage on Tuesday morning (11 July), but it was too early to give a detailed picture.

‘A lot of people are affected, to varying degrees,’ said Piron.

‘In our modern world, it is difficult to accept such a sudden event. But it is unfortunately the lot of those who work with nature.’

Some producers are calling for a state of emergency…

Photo credit: @JBLemoyne Hail in Chablis is expected to have severely damaged vineyards in the southern part of the famous…

Growers under pressure after temperatures plunge…