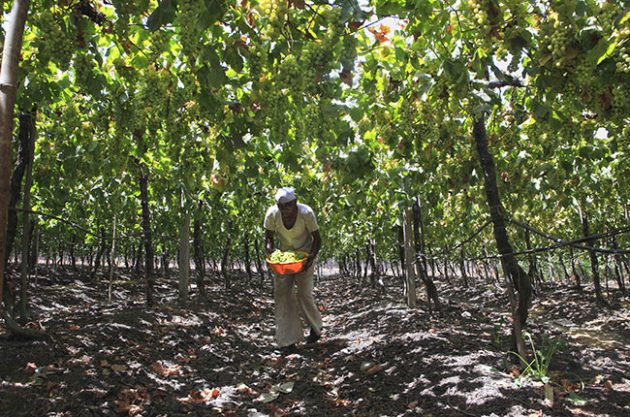 Anson: Making wine in India – Not for the faint-hearted

A grape picker in Nasik, known as the ‘capital of Indian wine’ and where Sula is based. Credit: Zuma / Alamy Stock Photo

Rajeev Samant is extremely confident considering he makes his livelihood producing wine in a country where the government recently took away much of the ability of his customers to easily buy his products, and then compounded the issue by banning large numbers of shops, bars and restaurants from selling them at all.

The first blow came in November 2016, when the government of India announced the withdrawal of all 500 rupee (around £6) and 1,000 rupee banknotes as a fight against forgeries. The second came a month later when the Supreme Court announced the ban, from April 2017, of all alcohol sales in shops – then extended to bars and restaurants – within 500 metres of a national and state highway.

‘It was a blow, of course,’ said Samant when we sat down in Bordeaux a few weeks ago. ‘The demonetization policy will be good in the long run for tax and compliance issues, but its initial impact was brutal because most people in India don’t use bank cards, they use cash so there was an instant hit to our bottom line’.

‘But India is all about contradictions, and you learn to work with them. This is a country with 32 states, 1.2 billion people, 22 languages, 100 dialects. It’s the furthest you can get from a homogenous society, and to date wine represents less than 1% of all alcohol consumed, representing maybe 0.16 litres per head. But it’s the biggest whiskey consumer in the world, and you cannot overlook the potential. Things have started rolling, and they are going to keep rolling’.

If there’s a more impressive man in the wine trade that Rajeev Samant, I look forward to meeting them. A conversation with him is a crash course in Indian economic history, as you would expect, but also in entrepreneurship and self-belief.

His confidence proves well placed just in the few weeks since we met, as the Supreme Court this week modified the highway law by allowing regional governments to downgrade roads from being national highways when passing through cities. An amendment that should protect a significant slice of the US$10 billion loss threatened in annual revenue to the hospitality industry nationwide.

‘For the wine trade the most important outlets are within city limits, not on the highways,’ he commented by email after the judge’s decision. ‘The original ruling affected a lot of five-star hotels within Mumbai, Delhi, Bangalore and other metro limits, including a number of Oberoi, Taj, ITC, Hyatt and Marriott properties. This was a big blow to our business. So we are obviously very happy with the clarification and we now expect business to soon bounce back to normal’.

Samant seems to have made a career out of betting on the right horse. The son of a first generation shipping entrepreneur, he studied industrial engineering and economics at Stanford before heading to Silicon Valley where he worked for Oracle for several years before wanting to do something on his own.

Heading back to India in 1994, he looked at a large plot of land in Nashik, an ancient city in his home state of Maharashtra, that his father had bought intending to subdivide and build houses, but was unable to secure the permissions to do so.

‘Coming from California, I decided what India needed was organic food. I started learning about local agriculture and discovered that Nashik was one of the world’s biggest producers of table grapes. It gave me my lightbulb moment’.

Almost 20 years after the first harvest of 40,000 bottles of primarily Sauvignon Blanc in 1999, Sula is producing close to one million cases of wine per year across over a dozen grape varieties. The business has been growing at between 15 and 20% per year over the past six years, with 93% of production sold in India itself. What started off as a classic investment journey – half the US$1 million raised from family and friends, and half from the bank – has become the largest wine producer in India, a leading wines and spirits importer responsible for brands such as Remy Cointeau and Hardys and a major wine tourism destination year-round, with the highlight coming with SulaFest world music festival every February.

‘We receive 250,000 visitors per year here,’ says Samant, ‘many of whom will have never drunk wine before. In fact we’re pretty sure our tasting room sees the single biggest number of people worldwide taking their first sip of wine – most of whom chose the slightly-sweet Chenin Blanc, now our most popular white’.

Developing the visitor centre can be added to the list of challenges that Samant has worked through. For a start, he knew nothing about wine when he had his lightbulb moment, and fixed that by doing a harvest with Kerry Damskey in Sonoma (of Terroirs Incorporated consultancy) who became his mentor and advisor. He then had to get around India’s monsoon climate by growing grapes in the winter and inducing dormancy in the summer by a hard pruning, something that he had observed with the local table grape industry. Securing a winery license took two years of persuasion, even without getting permission to serve customers onsite in a region that previously had made it illegal for members of the public to enter the building of an alcohol producer.

And then there was the small question of India’s famously perilous land distribution system and how it interplays with the even more perilous caste system. Impossible to cover all of this here, but essentially an individual in Maharashtra can’t own more than 20ha of land, so Sula works with 300 growers who have an average of 5ha each. That has taken them today to 1,500ha of vines growing at around 250ha per year to keep up with demand.

‘One of the more pleasing ironies is that when the government carried out its land redistribution programmes in the 1960s and 1970s,’ says Samant, ‘the rich got the fertile land and the poor the rest – and it is often this poor soil that is better for wine growing’.

SULA helped micro-finance numerous smallholders who typically had been farming around an acre of land on a subsistence basis to buy more and then offered them ten year contracts to concentrate on wine grapes. The first people they employed to help in the winery were Adivasi villagers, among the most dispossessed in the caste system. Before the winery opened only one person in the local village was working ‘as a petrol pump attendant’, while today 100 villagers work for Sula.

‘It has become a virtuous ecosystem,’ said Samant, ‘and added a dimension that I didn’t necessarily envisage back in 1993’.

He has received some help along the way. Maharashtra now has a policy where locally bottled wines attract zero excise duty compared to a 200% tax on those from overseas or the rest of the country – and with 60 million people living there, this is a significant boost. Today there are around 20 wineries in the state, with Sula by far the largest.

There is just one area where it seems Samant couldn’t overcome the challenges. Sula is a sustainable vineyard, using no chemical fertilisers and sulphur to treat mildew, but it is not organic. ‘Grapes are not native to India, and with the monsoons it has proved just too complicated to farm entirely organically’.

Don’t bet against him making it happen at some point though.

Why Bordeaux wine tourists are now spoilt for choice…