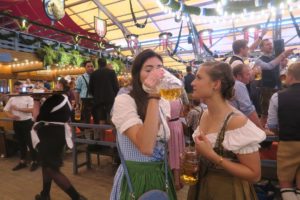 Munich celebrates Oktoberfest: Even the Terminator was there

Dirndl – or no dirndl – that is the question. For locals, it is a must, and for tourists arriving at the Munich Main Railway Station, there are plenty of stalls ready on the platform for those who want to dress the part. When getting off the trains, for those who arrive without, it’s fast food and a fast dirndl to go.

I am walking behind a couple of breathless and breast-less Japanese girls who leave the station in nice push-me-up dirndls a little later. For men, it is Lederhosen – and a must for Arnold Schwarzenegger as well who arrived on Tuesday and rocked away at his table in one of the beer tents.

The very first and very modest tents started 150 years ago in 1867, accommodating not more than 50 people and had little petroleum lights at nights. This has changed now. The largest tent is the Löwenbräu Tent and can accommodate 10,000 guests. More or less a city… in a tent… a really big tent.

This year, Oktoberfest will last two days longer, ending on October 3, with a half-price Family Day on Monday, October 2.

The classics in the form of roast chicken, pretzels, and beer is still the favorite foods in the tents. New is the increasingly wide range of vegetarian and vegan dishes.

Food to go had a slow start due to the rainy weather, but as soon as the skies cleared, roast sausage, salmon, and Leberkäse sandwiches were as popular as usual. The numbers of sold dishes and drinks is about level with last year.

The cold weather on the first days of the Oktoberfest was terrible for all the outdoor vendors and gigantic entertainment park.

While the Oktoberfest Lost and Found Office was doing well until Saturday night, the office counted 1,300 items – among them 350 pieces of wardrobe, 350 passports, 120 wallets, 110 smart phones and portable phones, 110 pairs of glasses, 100 umbrellas, 85 keys, 35 bags and backpacks, 30 pieces of jewelry, 10 cameras, one tenor, one flugelhorn, one Napoleon hat, one monk’s robe, one limited edition Oktoberfest mug (with a price tag of 120 euro), 2 wedding rings (both with engravings), 2 paddles, 2 blood sugar analyzers, and a pair of high heels.

Locals celebrate together with guests from all over the world: While the number of visitors from Italy has gone down a bit, more guests from the USA came back to Oktoberfest. However, there were also many guests from Switzerland, Asia, Australia, the Netherlands, Portugal, and Spain.

The improved security measures were welcomed by the guests, who also complimented the wardens for their friendliness.

Since the middle weekend of Oktoberfest is the “Italian weekend,” the Munich police and rescue squads get supported by Italian, and lately also French, forces. This makes communication during incidents a lot easier.

At half time of the Oktoberfest, officials estimate that there were 3 million visitors so far and with the nice weather, Munich is hoping to reach 6 million visitors again by the end of the “WIESN.”

Hotel rates are rocket high and so is Airbnb. Two American students quickly bought a dirndl, enjoying 4 days of great fun at Oktoberfest, while paying 320 euros for a tiny room with Airbnb.

According to Airbnb, over 35,000 guests were using their service in Munich, and Airbnb accommodations were mostly sold out 2 days ahead of the start of the Octoberfest.

But why is Oktoberfest called “Oktoberfest” when it actually begins in September?

The historical background: The first Oktoberfest was held in the year 1810 in honor of the Bavarian Crown Prince Ludwig’s marriage to Princess Therese von Sachsen-Hildburghausen. The festivities began on October 12, 1810 and ended on October 17 with a horse race. In the following years, the celebrations were repeated, and later, the festival was prolonged and moved forward into September. 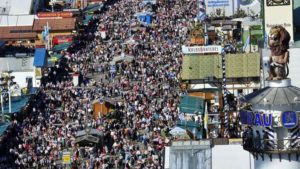 By moving the festivities up, it allowed for better weather conditions. Because the September nights were warmer, the visitors were able to enjoy the gardens outside the tents and the stroll over “die Wiesn,” or the fields, much longer without feeling chilly. Historically, the last Oktoberfest weekend was in October, and this tradition continues into present times.

This copyright material, including photos, may not be used without written permission from the author and from eTN.