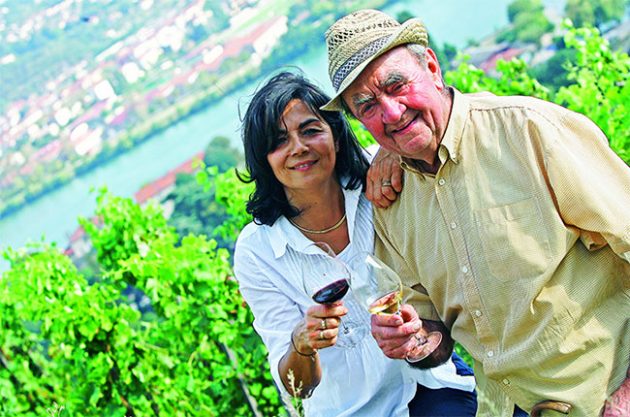 Georges Vernay, one of the men who saved Condrieu in the Northern Rhône and put Viognier on the world wine map in the process, has passed away at the age of 92.

Georges Vernay (1926–2017) was the pioneer of the appellation we know today as Condrieu in the northern Rhône.

He took over at the family winery in 1953 with only one hectare in the Coteau de Vernon. His father, Francis, had planted vines in 1937 and at that time the domaine was cultivating several crops alongside vines.

The appellation of Condrieu was born in 1940, but the name was not officially listed by French officials until 1945, after the Second World War. The wines of this time were sold simply with Viognier on the label, rather than the name of the appellation.

Before Condrieu gained a worldwide reputation, the appellation nearly disappeared.

In 1960, the AOC included seven hectares of Viognier – believed to be some of the only commercially-planted Viognier left in the world at the time.

It was Georges Vernay’s brilliance that transformed this small appellation into one with a worldwide reputation.

‘My father-in-law was a real, erudite wine grower who represented the [Viognier] grape,’ said Paul Amsellem, of Domaine Georges Vernay and husband of Christine Vernay.

‘He did not realise that he represented the grape all by himself [for a long time],’ he told Decanter.com.

Paul Amsellem described Georges Vernay as ‘a forerunner in the comprehension of the Viognier grape but also in the techniques of vinification’.

He added: ‘He was one of the first to use thermo-regulation and barrels in the Rhône Valley.’

Georges Vernay was president of Condrieu for 30 years. Today, all the winemakers from this appellation have lost the forefather of Condrieu.

The best of the best from an exciting vintage…